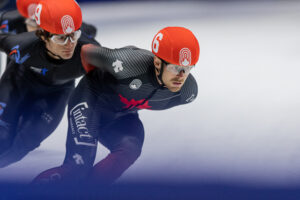 MONTREAL, QUEBEC – Pascal Dion and Kim Boutin were victorious in the third and final 1000m of the 2021 Canadian Short Track Championships presented by Intact Insurance in Montreal on Saturday.

The Montreal native raced from the front for much of the final, which helped him avoid a big collision that saw teammates Maxime Laoun and Jordan Pierre-Gilles crash violently into the protective mats. Dubois, who lost some momentum because of the crash, made a charge from the pack of the pack but Dion was able to hold him off thanks to a defensive track in the last lap.

The 2021 Canadian Short Track Championships conclude tomorrow with the 500m (3) and 1500m (3). The races will be live streamed on Speed Skating Canada’s YouTube channel and Facebook page starting at 10:50AM ET. CBC Sports will also have live coverage of the races.

Rankings are calculated based on the best 2 of 3 race results in each skater’s best 2 distances.