Skip to main content
Home Solid team work helps Canada to the win over Australia
May 31, 2016

Solid team work helps Canada to the win over Australia

Canada had five set battles with Poland and Iran to open the tournament, coming up short in the tie-breaks, but today in a true team effort they ended up on the winning side.

“We played well against Poland and Iran… but we finally won a fifth set, so that’s a big monkey off our back,” said Canadian opposite Gavin Schmitt. “Having a win now is good for the confidence moving forward.”

“It’s always a battle when we play Australia. Their block defence was good tonight. It was hard for us to score points, but our serves were better in the end of the match, and I think that was the difference,” said Canada’s head coach Glenn Hoag.

“The tournament is far from over – there are four more matches, and I think every match is going to be a big battle.”

Though Canada came out with a decisive first-set win, Australia clawed its way back to win the second set and looked confident in the third, winning that set by five points. The fourth set battle went to 29.

“The fourth set was a really important set for us going forward in our tournament,” said Canada’s Captain Rudy Verhoeff of the turning point of the match.  “At that moment, we had to realize we had to rely on our training and preparation, and we knew that we were well prepared, and if we were aggressive and set the tone, then we could pull out the win. We relied on our preparation and our knowledge of our skills to carry us through that set.”

Canada dominated the fifth set and finally Justin Duff’s attack slid through the middle for Canada’s set and match victory at 15-11.

Said Verhoeff: “It feels really good to get that victory, and in this tournament we have to now put that behind us and focus on the next match.”

The WOQT is a round robin tournament: eight teams are competing in 28 games, with each country playing seven matches in as many days. The top-ranked Asian team and the top three ranked teams, four in total, will qualify for the Rio 2016 Olympic Games 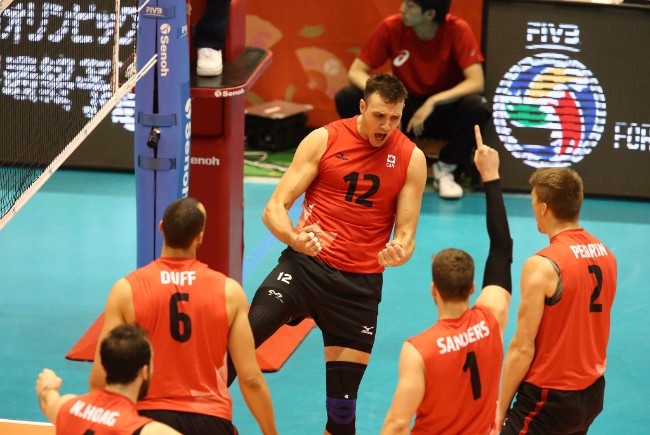