Cycling Canada  – Bromont, August 18, 2017 – The 2017 Global Relay Para Road Championships p/b Lexus concluded on Thursday with national titles awarded in the road races for multiple categories.  Held in Bromont, Quebec, the national championships bring together para-cycling athletes from across Canada to compete for the opportunity to become Canadian champion.

The road races were held on a 10 kilometre out-and-back course along Chemin Adamsville, west of Bromont and near Saint-Alphonse, with riders doing laps of the circuit over distances ranging from 30 to 80 kilometres.

“The past two days have been gorgeous conditions,” said Championships organizer Nicolas Legault.  “The athletes were impressive and put on a really good show.  We are really pleased with the help of the city and the local people.”

In the Tandem events, Rio Paralympians Shawna Ryan of Saskatchewan and her pilot Joanie Caron of Quebec won the 70 kilometre women’s race by nearly five minutes over the team of Annie Bouchard and Evelyne Gagnon of Quebec.  Matthieu Croteau-Daigle and Benoit Lussier led a Quebec podium sweep in the men’s 80 kilometre competition as they took their second gold medal of the Championships. 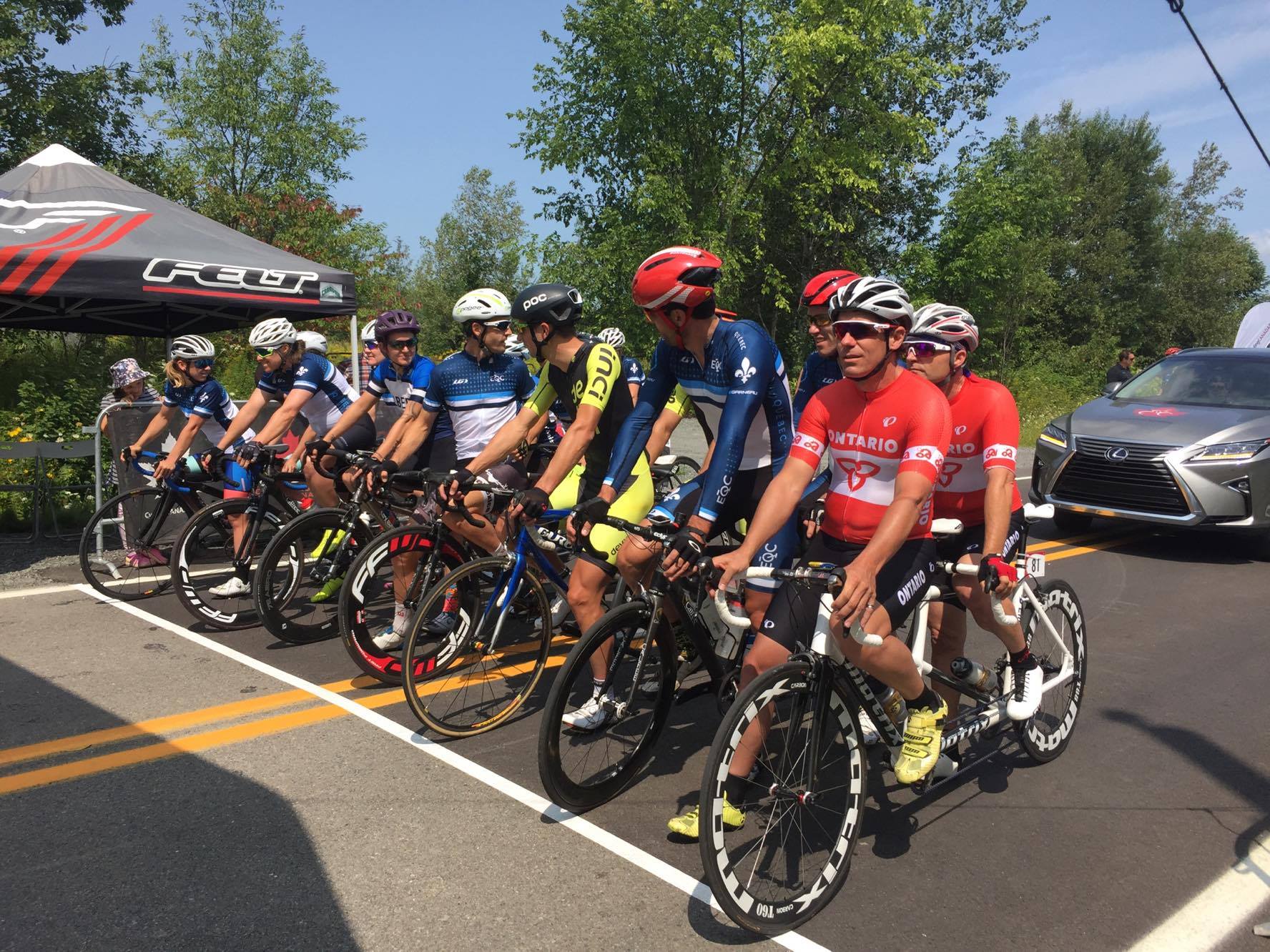 The title for the combined women’s and men’s Tricycle category race of 30 kilometres saw Quebec’s Louis-Albert Corriveau (T2) take the title with a time of one hour and 56 seconds, finishing two seconds ahead of Mike Shetler (T2) of Quebec, with the bronze medalist going to time trial gold medalist Shelley Gautier (T1), the first woman finisher.

The Handcycle competition was divided into two categories, with women’s H2/H3/H4 and men’s H1/H2 racing together for 30 kilometres, and was won by Quebec’s Myriam Adam (H3) ahead of Kara Douville (H4) of Alberta.  The 50 kilometre men’s H3/H4 competition was won by Rio Paralympic double bronze medalist Charles Moreau (H3) of Quebec, followed by Joey Desjardins (H3) of Ontario.

The final championship category was the 50 kilometre combined women’s C4/C5, with Quebec team mates and Rio Paralympians Nicole Clermont (C5) and Marie-Claude Molnar (C4) taking gold and silver, the reverse of their finishing order in the time trial. 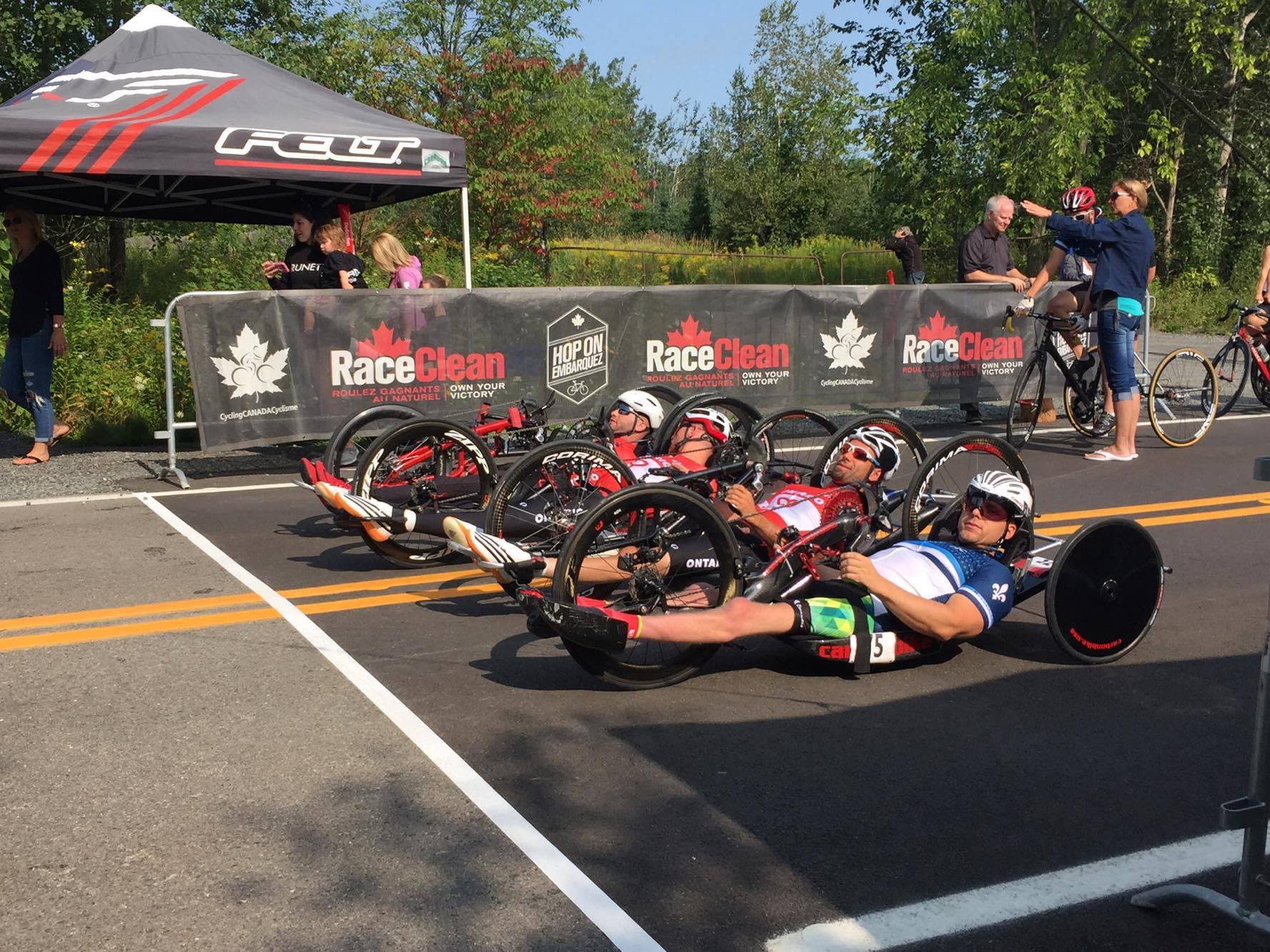 Sébastien Travers, Head Coach of Para-cycling at Cycling Canada, said, “we had no specific expectations for our top riders at the Nationals, since we are leaving for the world championships in the next two weeks and they having been preparing for that.  The positive thing is that we have some new athletes from the NextGen program and other provinces that are showing great signs of progress.”