Agility Training: Insights from the Research

December 12, 2016
by Nancy Rebel
View All Blogs and Articles 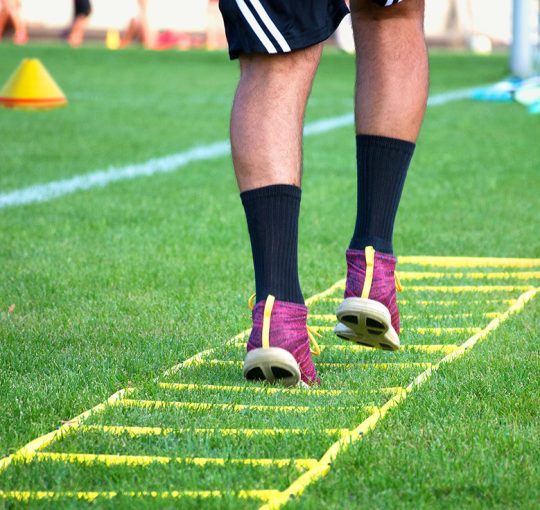 High performance athletes depend on coordination and agility to fine tune their skills and abilities on the field of play. Outside of the skills needed specifically for sport, agility is often looked at as a leading factor in determining success in a sport. Athletes need to be able to react to situations quickly, with strength and explosiveness. Developing agility through specific training has been under examination for many years.

Research into agility training and testing has undergone a significant evolution over time. Studies done throughout the years have truly focused on the definition of agility in its relation to sport performance. These definitions around agility have developed and adapted to over time to compensate for new understanding of the variables involved. Early definitions looked into agility purely in terms of an individual’s ability to change body direction and position quickly. In the 1970’s researchers recognized that there needed to be an acknowledgement of the integrated component of perception and decision-making to agility. By the early 2000’s a model was put forward that incorporated a change of direction (COD) speed component with technical, strength and power factors, as well as a perceptual and decision-making component. The latest research includes a revision to the agility definition to acknowledge that CODs most often occur in response to a stimulus such as an opponent’s actions. Agility is defined by Sheppard and Young4 as “a rapid whole-body movement with change of velocity or direction in response to a stimulus”. A common feature of agility movements is that they are reactive in nature.

Much like speed and strength, agility should be integrated into the everyday training plan. Researchers agree that agility is a skill that can only be developed over time and requires specific training attention. In fact it is recommended that agility training should be integrated into speed and strength training in order to develop sport-specific aptitudes. The high level of achievements in athletes these days requires that a high level of agility is a necessity for performance success.

According to Graham1, there are three critical benefits of agility training:

Going back to Sheppard and Young’s definition, reactivity becomes a key factor in agility training. Recent research and coaching feedback strongly recommends the use of stimulus to train for agility. Studies have gone on to examine the effectiveness of stimuli such as flashing lights to instigate agility maneuvers5. However the results have indicated that using light stimulus does not improve decision-making, reaction time, reactive COD, or agility. In fact it was shown that athletes did not improve any more than they did with pre-planned maneuvers. What has become clear is that agility training must involve the use of sport-specific stimulus of an opponent’s movement in order to improve performance. Further studies also suggest that the higher the level of skill of the athlete, the better their reactive agility when responding to a sport-specific stimulus3. There was no demonstration of superior skill for the high level athletes when the testing involved a generic stimulus such as the flashing light.

Practically speaking, research supports the use of evasion drills and small-sided games (SSGs) as effective methods of field-based agility training5. These drills key on the sport-specific stimulus and engage the perceptual and decision-making components of agility. SSGs may have greater effectiveness as they provide opportunities for greater complexity in decision-making demands, and exhibit greater transfer to competition. Progressions through speed and strength drills to COD training to reactive agility training may be required based upon athletic skill level.

While agility testing and training has a long history within sport performance research, there still is significant development required to fully explore the most effective ways to engage in agility training. While consensus has been reached that agility must include changes in speed and direction, it must also include the elements of perception and decision-making to be fully explored in the sport context. Athletes at all levels of sport should seek to improve their reactive agility in order to achieve their highest performance success.