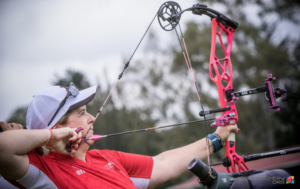 YANKTON, USA – The 2021 Hyundai World Archery Championships are in Yankton, South Dakota, and are taking place from September 19-26, 2021.

Archery Canada’s compound program is excited to see athletes return to the world stage after a two-year absence due to the ongoing COVID-19 pandemic. Despite domestic restrictions impacting both athletes and coaches, the team has remained resilient in their motivation to prepare for this event over the past year. Following the selection process for the 2021 Senior World Championships, Canada was set to field a full Compound team, but due to certain COVID-19 restrictions and some individual concerns, two female archers withdrew in recent weeks. While several scenarios were reviewed as a consequence, the World Championships compound team will be comprised of a three-man squad and a one female competitor:

This event will be McClean’s 7th World Championships. Her previous experience includes the 2018 World Archery Indoor Championships that were also hosted in Yankton. McClean represented Canada well and brought home the bronze medal.  She will participate in the women’s individual compound event, as well as the Mixed Team event, with the highest qualifying Canadian male archer, following the qualification round in Yankton on Tuesday.

The Canadian men’s compound team will have the following three athletes:

While this will be Brehaut’s first World Championships appearance, the team brings a depth of experience and success. Fagan returns to the World Championships for the third time. Canada’s men’s team is highlighted by the return of former World Champion Christopher Perkins, who will be competing in his third Senior Worlds. His most recent appearance was in 2015 in Copenhagen, where he earned a silver medal in the compound men’s team event.

“This team is experienced and ready to perform at the Senior World Championships in Yankton,” says Sean McKenty, one of the compound team leaders. “They know what to expect, what the expectations are, and know that they can make it through the elimination rounds and be contenders at this event!”

This event, and going forward, will see the start of the Compound program’s advancement, looking towards sending a full team to the Pan Am Games Qualifier in 2022, taking place in Santiago, Chile.

Archery Canada is looking to focus and further develop the Compound program over the next two to five years to not only qualify a full team for the Pan Am Games, but to become podium contenders at those Games and World Championships in the future. This will see the implementation of identification camps for youth development as well as increasing a culture of High Performance archery in the current program.