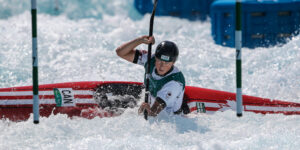 The semifinal proved to challenge many of the racers with only 9 women realizing penalty free runs. Florence made some costly mistakes on the course that caused her to finish outside of the top 10 advancement cut-off for finals.

Reflecting on her semifinal run, Maheu added, “I was pretty nervous and they were not easy moves so I need to feel more confident in the future and be more consistent.”

Maheu will make the trip home back to Canada tomorrow following a long six-month European training and competition block in Europe.  “I am quite excited to get back to Canada as it has been a long time away from home.”

The Canadian entries are listed below.