Three-time Olympian in sailing David R Sweeney has passed away 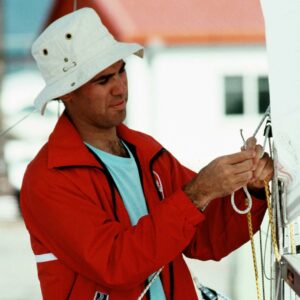 Kingston, September 20, 2021 – It is with great sadness that Sail Canada has learned of the passing of David R Sweeney on September 16, 2021, at the age of 61. David R Sweeney represented Canada at three Olympic Games in the Tornado – Multihull Mixed event. At his first Olympic Games in Los Angeles in 1984, he took 9th place with his brother Brian. After that, with his new partner Kevin Smith, he finished 10th in 1988 in Seoul, South Korea, and 5th in Barcelona, Spain, in 1992. He also won a bronze medal in the Hobie 16 class at the 1999 Pan American Games in Winnipeg while the sailing events were held in Gimli.

“First of all, on behalf of the entire Canadian sailing community and Sail Canada, I would like to offer our sincere condolences,” said Sail Canada’s National Performance Coach Ken Dool, who coached David R Sweeney at the 1992 Olympic Games, the 1999 Pan American Games as well as many World Championships and major events between 1990 and 1992. “

As gentle as he was on land, he was a fierce competitor on the water,” added Ken Dool. “I remember fondly that, at the 1999 Pan American Games, David was competing with Kevin Smith and they were not satisfied with their speed. They spent countless hours on the water in Gimli, including a dawn launching the day before the event, to solidify some changes, which ultimately resulted in a bronze medal for Canada. It’s a simple example of the dedication he had as a sailor and of the ultimate competitor that he was.”

“David was a consummate professional in his sailing efforts; no stone was left unturned in his approach. He was willing to share and absorb from anyone and everyone who could help him become a more complete competitor and, ultimately, become a better sailor,” said Ken Dool. “I would characterize David as one of the great out-of-the-box thinkers in Canadian sailing. He was involved in data analytics before it was the thing that everyone did. He measured, tweaked and refined everything on his boat and in his personal skills, while his approach was scientific and left nothing to chance. He calculated and re-calculated his settings, his strategies, the odds against and for success. He was truly an inspirational athlete that left a huge positive mark on my career as a young coach who had the benefit of knowing and working with such a fabulous man.”

From his obituary: “At the age of nine, David was introduced to sailing when the family purchased a summer cottage on Stoney Lake in Ontario and a lifelong passion began. Under the coaching of his father, the Stoney Lake Yacht Club, and in partnership with his brother, Brian, the Sweeney boys developed into a winning team, competing in the multi-hulled Tornado class. First, they competed on Stoney Lake, and later in regional and national regattas, before winning a place on the Canadian Olympic Team for the 1984 Los Angeles Games. David followed up to compete in the 1988 South Korea Olympics and the 1992 Barcelona Olympics. Sailing remained a constant in David’s life. His greatest joy was winning the CORK Regatta in Ontario and sharing his knowledge and expertise with his family and watching them compete. Over the past year, his time sailing on Lake Allatoona with the Atlanta Yacht Club brought him great happiness as he reconnected with the sport and saw his two youngest daughters blossom into sailors themselves.”

Check out his full obituary: https://www.dignitymemorial.com/obituaries/sandy-springs-ga/david-sweeney-10362168.

Established in 1931, Sail Canada is the national governing body for the sport of sailing in the country. Sail Canada is a leading international sailing nation, proud of its world class athletes, lifelong participants and inclusive culture. The organization and its members are committed to excellence by developing and training its leaders, athletes, sailors, instructors, coaches and officials. With the valued support from our partners, the Provincial Sailing Associations and our member clubs, schools, organizations and stakeholders, sailing is promoted in all its forms. By setting standards and delivering programs from home pond to podium for Canadians of all ages and abilities, from dinghies to keelboats, cruising to navigation, windsurfing to powerboating and accessible sailing, Sail Canada sets sail for all, sail to win and sail for life.
A sport in the Olympic program since the first Games in 1896, except in 1904, the pursuit of success in these Games is what fuels the focus of Sail Canada as Canadian athletes have so far achieved nine Olympic and five Paralympic medals.