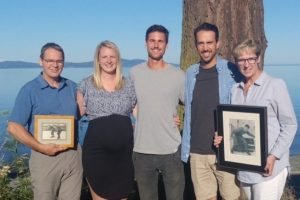 OTTAWA, ONTARIO – Speed Skating Canada announced today that the Shields Family of British Columbia was awarded the Gagné Family Award, while the City of Sherbrooke was recognized with the Sport Champion Award as the Partner of the Year, as part of the 2019-2020 Speed Skating Canada Awards program.

The remaining award winners will be unveiled on our website and social media channels in the coming weeks. Learn more about this year’s impressive list of award finalists here: Finalists Revealed for 2019-2020 Speed Skating Canada Awards.

The Gagné Family Award honours the family legacies that run through the Canadian speed skating community and is bestowed upon a family whose members have made an outstanding contribution to the development of the sport.

This year’s award is presented to the Shields Family of British Columbia, who are often credited with introducing the sport to Vancouver Island. Three of the family members were accomplished athletes, reaching the national level. Four family members were dedicated coaches, administrators, and officials and two are still actively involve in speed skating today.

Jim Shields brought his love of sport to Victoria, a city which rarely sees snow in the winter. The family continues to nurture both kids and adults in speed skating. This award recognizes the lifelong love for the sport and selfless volunteer efforts that the family have given to help speed skating thrive on Vancouver Island.

The Sport Champion Award (Partner of the Year) is bestowed upon a sponsor, supporter or partner who has demonstrated sustained commitment to advancing the sport of speed skating in Canada at the club, regional, provincial, or national level.

This year we recognize the City of Sherbrooke, which has been a strong supporter of the sport since the Club de Patinage de vitesse de Sherbrooke (CPVS) was established in 1972. Their relentless support has allowed the CPVS to become the largest speed skating club in Canada with more than 500 members and has fostered the emergence of many talented skaters, officials and volunteers who have contributed to the sport at the local, provincial, national and international levels.

The City of Sherbrooke has made countless infrastructure upgrades to the Eugene Lalonde Arena, which became a short track and figure skating only rink in 2019. These include the installation of an ice of international ice surface (2006) and hybrid board protection system (2015), as well as the upgrades to the officials platforms, Wi-Fi for webcasting, video screen for the presentation of results, and electronic chip timing system. The expenses related to infrastructure improvements, along with the annual contributions to speed skating activities in Sherbrooke, such as logistics support and ice time, total more than $ 5 million invested by the City of Sherbrooke over time.

“We are honoured to be recognized with the Gagné Family Award from Speed Skating Canada. Speed skating has truly been a memorable journey for three generations of the Shields Family over the past 75 years.” – Brenda (Shields) Hennigar

“Sherbrooke is definitely a city of sports and it is with great pride that we accept the ‘Partner of the Year’ award from Speed Skating Canada. This recognition of our commitment and the support we provide to the Sherbrooke Speed Skating Club touches us sincerely. The City of Sherbrooke is indeed very proud to be associated with the athletes, parents, coaches as well as volunteers and members of the board of directors of the Sherbrooke club. We are happy to contribute to the events that this team organizes, always with the greatest of professionalism. The world of speed skating will always be welcome in our city. On behalf of the entire population, we thank you for this honor!” – Steve Lussier, Mayor of Sherbrooke