Pentathlon Canada saddened by the passing of Past President Frank Gosling

On the evening of November 18, we lost one of our great builders, one of our leaders – Frank Gosling. Frank was President of Pentathlon Canada for over 15 years. An infectious smile, endless enthusiasm and the ability to connect with everyone are a few of his traits that stand out. He was never discouraged when his efforts to promote and develop our sport were not positively received. Frank carried on. Next.

Pentathlon Canada offers its sincere sympathies to the Gosling family and friends. 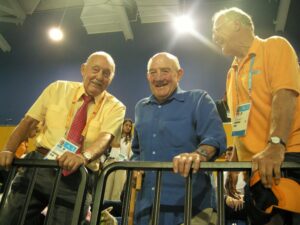 Dear Friends,
It is with great sadness that I am letting you know of the passing of our beloved Past President of Pentathlon Canada, Frank Gosling.

I know you have many wonderful memories and stories of your life around Frank and his memory will stay with us forever.

Frank was an early inspiration for me in the sport of MP. I recall his leadership when I was a young athlete attending some of my first National Championships.

He had a powerful presence, a booming personality and a big smile that I’ll never forget. I’m thankful he encouraged me as a young athlete.

He will be missed by many generations of athletes and coaches.
Joshua Riker-Fox OLY

We would also like to share our condolences on behalf of the COC to the Canadian Pentathlon community over the passing of Frank Gosling.

My thoughts of Frank, a bear of a man, are of an affable, gentle giant. Quick with a joke, a compliment, encouragement or friendship – slow to anger and always kind, decent, generous and warmly sincere. A gentleman’s gentleman.

Frank was an extraordinary man who lived an extraordinary life. His loss to the Pentathlon community and sport in general both in Canada and the world is beyond measure. But we can take solace in the knowledge that his son Tom, who was also an international level Pentathlete, continues Franks’ legacy with the same humour and qualities of his father.

How else could he have conceived and carried out the idea of “capturing” several sheep and then, much to my surprise, place them in my hotel room all those years ago in Porto Alegre, Brazil?

Godspeed to Frank and congratulations on a life well lived and to Tom and Franks’ extended family, my sincere condolences.

Warm regards to all,
Rob Stull

We will all miss Frank, his wonderful humour, and generosity.
Bob Noble

This is very sad news…..Frank was just such a nice guy…..he will be missed.
John Hawes

I must say I enjoyed Frank thoroughly!! He was quite a guy.
John Emery

I have many wonderful and fond memories of Frank at competitions and Congress. He always had an opinion that was accompanied by a keen sense of humour.

Although this is sad news, I think it’s a good time to remember Frank as he was. My memories of Frank are of a very energetic and charismatic man, always smiling and ready with a joke and a very positive outlook on life.

Please share with Tom and the rest of his family, my sincere condolences.
Ivar Sisniega
(past VP UIPM, current SG of PASO)

Sad news indeed.
Frank was a special guy and will be missed.

Please pass along our condolences to Frank’s family.
John and Nancy
(John Makela)

This is very sad news. Frank was such a good happy person creating happiness around him through his kind and humorous character. He will be sadly missed.

My condolences to his family and to Pentathlon Canada.
Joel Bouzou OLY
VP UIPM, Founder and President of Sport and Peace

I will always remember Frank’s big smile, booming voice and most of all, his warm welcome when greeting you.
George A. Skene OLY

Many thanks for including me in your message about Frank Gosling passing.
Very sad news… John and I had very special moments in his company and we appreciated his many qualities as a good, intelligent, human being..there are many to list here, needless to say.

He left a nice family and many good memories. May he Rest In Peace.

With best wishes to you, Chris, and family.
Fondly,
Isabel
(Isabel Davila Holland)

Modern pentathlon, a core Olympic sport, is the only sport created specifically for the Olympics. The founder of the modern Olympics, Baron Pierre von Coubertin, developed the sport as the ultimate skill-and-strength test of a soldier. Modern pentathlon debuted at the 1912 Stockholm Olympics and has featured in every subsequent edition of the Games. In 2000, the women’s competition was added. It is still the most varied and demanding multisport test in the Olympic family.

What does a Modern Pentathlete do?

Modern pentathletes compete in five sports: one-touch épée fencing, 200-metre freestyle swimming, equestrian show-jumping and lastly, a combined laser pistol shooting and running event (referred to as Laser Run). The final Laser Run event is incredibly exciting. Athletes are seeded in order of their total points accumulated from the three previous sports. The number of seconds each athlete starts after the highest-ranked competitor is determined by their points difference. Following a short burst run to the laser targets, the athlete must complete five shots on the target’s bullseye within 50 seconds. Next comes an 800-metre run. After three more Laser Run legs, the first athlete crossing the finish line wins. The relay events (men, women and mixed) include all five sports, adjusted for teams of two.