Skip to main content
Home News Meet the People Behind the Performances
August 12, 2020

Meet the People Behind the Performances

by Athletics Canada
View All News 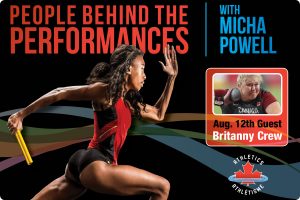 Athletics Canada launched a new weekly podcast series today: People Behind the Performances hosted by Micha Powell. A 2016 Olympian, model and advocate, Powell will be in conversation with some of your favorite Canadian athletes, giving us a deeper understanding of the people behind the performances.

“Canada’s track and field community comes from diverse backgrounds with equally diverse and powerful stories to tell,” Powell said. “This podcast was created to amplify athlete voices, and to share personal experiences that showcases athletes as much more than bodies for entertainment.”

Over its six-week run, People Behind the Performances will feature chats about how athletes are getting through COVID-19, overcoming setbacks and what their hopes and dreams are this Olympic and Paralympic year. The podcast will also feature French episodes, due to Powell’s fluency in both English and French.

In the debut episode, Micha talks to shot putter Brittany Crew. Crew won silver at the 2019 Pan American Games, as well bronze at the 2018 Commonwealth Games. The two Olympians talk about Crew building her own shot put circle to continue training during the pandemic, overcoming mental health challenges with music, body image in track and field and Tokyo Olympic goals.

Check out the premiere episode of People Behind the Performances here, or anywhere you access your favourite podcasts.

About Micha Powell
Micha Powell has both track and journalism in her blood. When she was only two months old, Micha’s mother – journalist and Olympian Rosey Edeh – scooped her up and traveled the world competing for the Canadian Track Team with Micha in tow. Though her parents were elite track athletes – Micha’s father is American Olympian and long jump world record holder Mike Powell – she participated in other sports, only taking to the track at age 17.At the University of Maryland, she pursued her passion for Journalism and Languages while being a student-athlete in the NCAA. To this day, her 400m indoor and outdoor records stand at her alma mater. Powell was named to the 2016 Olympic team as part of the 4x400m relay. Though she did not compete in Rio, she joined her parents in the ranks of Olympians and she is currently working towards the Tokyo Olympic Games next summer.

About Brittany Crew
Brittany Crew has dreamed of competing for Canada since she was seven. At first, she wanted to play for the Canadian women’s soccer team but shifted her dreams after being encouraged to try shot put in high school. Crew quickly excelled at the sport, reaching the 2012 IAAF World Junior Championships. The following year, Crew won gold at the CIS Championships and bronze at the FISU Summer Universiade. Crew won gold again at the CIS Championships in 2016, this time setting a national university record with a throw of 16.96m. Crew represented Canada at her first Olympic Games in 2016. The following year, she returned to the Universiade and won gold and made the finals of her first career IAAF World Championship, finishing sixth. She would go on to take bronze at the 2018 Commonwealth Games and silver at the 2019 Pan American Games.