Mark Hicks Pays it Forward in Alberta for Love of Judo

Montréal, September 8, 2021 – Judo will always hold a special place in the heart of businessman Mark Hicks. Formerly an athlete in his self-described “younger days,” for the past several years he has been an instructor at the St. Albert judo club, while also promoting his chosen sport through his involvement in the Albertan and Canadian judo federations.

Since 2018, Hicks has supported Judo Canada in numerous ways. Whenever he is asked, he always comes through for the organization, whether it be by providing sponsorships through his car dealership, Sherwood Ford, by organizing special events, or simply by passing along his knowledge and expertise.

“I’m always happy to help Judo Canada, no matter what!” he declared, with characteristic enthusiasm. 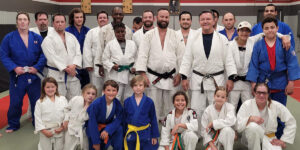 Introduced to judo at a very young age, Hicks slowly worked his way up to the national and international levels, where he reached the podium on several occasions in the 1980s. Beyond his achievements and results, however, judo taught him important life lessons.

“I was very lucky! Judo allowed me to travel, to make lifelong friendships, and to become a better person in general. It taught me discipline, instilled in me the spirit of competition, and fostered many of the values that I hold dear. It helped me make good decisions and taught me to persevere, no matter what. It’s very good for young people,” he explained.

“Judo gives you direction and drive! A person’s habits determine their future, which is what I want to help young people understand. As an instructor, it’s always great to see them progress. We want them to become great athletes, but our job is to create good humans, and judo is perfect for that.”

One thing is certain, Hicks’ hard work and ongoing contributions are appreciated both in his home province and at the national level.

“Mark is a textbook example of Judo for life! He has spent years dedicating much of his personal time and expertise into making the sport he loves continue to grow. His passion for judo is well respected and appreciated at every level in the judo community and Judo Alberta is extremely grateful to have Mark as an ambassador for the sport.” stated Nate MacLellan, executive director of Judo Alberta.

“Mark is truly a tornado. He’s always brimming with ideas, availability, and enthusiasm. He volunteers anytime he’s called upon, and “the sky’s the limit,” as he always says. He has friends and contacts all over, and he can find a solution to any problem. I’ve often wondered if he ever even sleeps. I figure he must sleep standing up and fully dressed, so that he’s always ready to go,” enthused chief operating officer of Judo Canada Patrick Esparbès.

The pandemic of the past year and a half had a major impact on the sport and caused intermittent interruptions in judo practice across Canada. Today, things seem to be returning to normal, slowly but surely.

According to Hicks, the upcoming season will be crucial for judo and for maintaining, or re-instilling, a passion for the discipline among the judoka who have been deprived of opportunities to practise their sport. For this reason, he will continue to offer financial support to the best judokas in the country, the Elite National Championships and the Edmonton International Championships, among other things, while pursuing his other commitments with his club, province and Judo Canada.

“For the past 18 months, the athletes have been unable to practice their sport in the usual way, and they’ve missed out on moments they’ll never be able to get back. It’s up to us—instructors, managers, and judo enthusiasts—to rekindle that passion and showcase our sport,” claimed the organizer of the Edmonton International Judo Championship, which attracted more than 100,000 spectators to the West Edmonton Mall during its most recent edition, in 2019. The major competition is just one more example of Hicks’ commitment to judo. His involvement stems from a spirit of philanthropy, as a thank you to the sport that has given him so much; he asks for nothing in return.

“I do it because I love judo and because I’m able to. I’ve been very blessed in my life; I have a successful business and I consider myself lucky to be in a position where I can do these kinds of things. It’s important to support our athletes and our sport. I’m happy to do it and I hope it inspires others to do the same,” he concluded.

Are you looking for a club near you? Visit this page: judocanada.org/club-finder-tool/