After breezing through their respective qualifying heats, both Canadians advanced to the semi-final round, where Genest faced Lea Sophie Friedrich of Germany, while Mitchell rode against her teammate Emma Hinze. After two races, the Germans came out on top to qualify for the gold medal round, with Genest and Mitchell facing off in the bronze medal final. In the end, Olympic gold medallist Mitchell edged out Olympic Keirin bronze medallist Genest in two races to win her first World Championship medal. 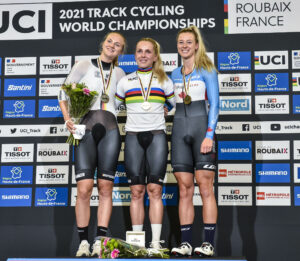 “It was great to be back racing and exciting to have both Lauriane and myself in the finals,” said Mitchell. “It’s never ideal having to race against each other but she raced well and I was happy to walk away with the bronze. Next up is Keirin, and I am excited to go out there and give it my all. Who knows what will happen.”

Despite the lack of competitions over the last two years, Canadian athletes have proved to be tough contenders throughout the week, with Maggie Coles-Lyster just missing the podium in the women’s Scratch race before helping the young women’s Team Pursuit squad place 4th. On the men’s side, Hugo Barrette finished 9th in the Keirin, his best-ever result at a World Championships.

Racing continues today with the men’s Omnium and Sprint events. The event can be streamed live on FloBikes and live results are available here.