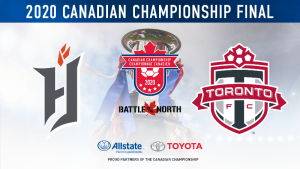 Hamilton won 2:0 over HFX Wanderers of Halifax in the Canadian Premier League Final to lift the 2020 North Star Shield. Alexander Achinioti Jönsson and Maxim Tissot were the goalscorers, with both goals scored in the second half. Captain Kyle Bekker lifted the trophy for the second year in a row.

In the Canadian Premier League Final, Achinioti Jönsson scored the winner on a header from a Molham Babouli pass. Babouli was selected the Player of the Match. Tissot scored the second goal late with a long shot that tricked the opposing goalkeeper.

Across the 44 matches between the two competitions, the 11 professional clubs included more than 150 Canadian professional players in their match-day rosters. In all, 118 goals were scored across the 44 matches from the two competitions. Sixteen members of Canada Soccer’s Referee Program also spent six weeks inside of the Canadian Premier League’s Island Games bubble in Charlottetown with matches from 13 August to 19 September. Juan Marquez, Stefan Tanaka-Freundt, Gabrielle Lemieux and Myriam Marcotte were the referees for the CPL’s Final Match.

Since 2008, Canada Soccer’s Canadian Championship has featured 14 different Canadian teams across more than 100 matches. To date, Toronto FC have won the competition seven times, the Impact de Montréal four times, and Vancouver Whitecaps FC once. From the Canadian Championship, the Canadian winner qualifies for Concacaf Champions League, which plays into the FIFA Club World Cup. From the list of Canadian champions, both Montréal (2014-15) and Toronto (2018) have reached the Concacaf Champions League Grand Final.