Valérie Maltais surpasses her personal best by over two seconds to take a surprise title; Laurent Dubreuil claims second gold of the event 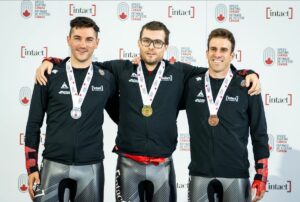 CALGARY, ALBERTA – Valérie Maltais and Laurent Dubreuil captured the 1000m titles on the third day of the 2021 Canadian Long Track Championships presented by Intact Insurance. Both skaters stood out in a crowded field of gold medal contenders at the Olympic Oval in Calgary.

Maltais crossed the line in 1:14.95, over two seconds faster than her previous personal best time in the 1000m. The native of Saguenay, QC specialized in the distance when she skated short track, having captured two 1000m World Championships medals over her career, but has been focused on endurance events since transitioning to long track in 2018.

Rounding out the women’s 1000m podium were Kaylin Irvine (Calgary, AB) and Maddison Pearman (Ponoka, AB). Their times of 1:15.39 and 1:15.60 respectively were fast enough to meet the Canadian standard and potentially qualify both for the World Cups this fall, which would mark Pearman’s first appearance on the full international circuit.

For the second time at this Canadian Championships event, Dubreuil finished the day as the fastest man in the country. After setting a blistering speed in his opening 600m, the sprint specialist from Lévis, QC finished the full race in 1:07.29. Less than three tenths of a second separated the skaters in second to fifth position, with Vincent De Haître (1:08.02) and Antoine Gélinas-Beaulieu (1:08.10) narrowly beating their teammates to take silver and bronze.

With only eight weeks of on-ice training since returning from Tokyo 2020, De Haître qualified for his first speed skating World Cup circuit since the 2018 Olympic Games. The Ottawa native is attempting to become only the fifth Canadian to compete in two Olympic Games within a 12-month span.

Tomorrow’s fourth day of the Canadian Long Track Championships will feature both the women’s and men’s 1500m. The races will be live streamed on Speed Skating Canada’s YouTube channel and Facebook page starting at 4:00PM MT

“I was so surprised by my race and the result today. When I crossed the line, I couldn’t believe it. I know I’m fast and can skate well, so today was about focusing on that and not on the outcome. It worked out, so I think I have a lot to learn from that! In short track, my best distance was the 1000m, so now everything is coming together in long track as well.”

“I feel great, but it hurts a lot to start that fast so I have to pump myself up to do it again next time! My starts and first lap have been spot on right now, but I’m still working on the endurance part. The first 600m was the fastest I’ve ever skated in my life, so it’s a good sign for what’s to come. I know on a good day, I can beat almost anybody in the 1000m.”

“Overall, given my circumstances and that it’s only week eight of my comeback, I think the race was a big success. I have things to work on and know there’s a faster time in me, so I look forward to showing what I can do later on this year. I’m ahead of all of the benchmarks that my coaches and physiotherapists have set for me, so I’ve been on an upward trajectory so far! I’ve participated in enough Olympics, I’m here to compete.”