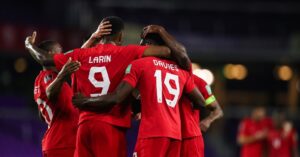 Canada Soccer have confirmed that their next two matches in FIFA World Cup Qatar 2022™ Qualifiers will be played in Bradenton, Florida against Aruba and Bridgeview, Illinois against Suriname. These are Canada’s last two of four matches in Concacaf Group B from which only one nation in each group will advance beyond the next round.

Both matches will be broadcast live in Canada on OneSoccer, with Canada’s away match against Aruba scheduled for Saturday 5 June at IMG Academy (20.00 local / 20.00 ET / 17.00 PT) and Canada’s home match against Suriname scheduled for Tuesday 8 June at SeatGeek Stadium (20.00 local / 21.00 ET / 18.00 PT). Fans will find extended coverage across Canada Soccer’s digital channels on Twitter, Instagram, Facebook and YouTube featuring the hashtag #CANMNT.

Canada and Suriname are currently the top-two teams in Group B with perfect six points from their two matches in March, with Canada on +15 goals difference compared to Suriname on +9 goals difference. Bermuda are next with three points (+1 goals) while Aruba and Cayman Islands were both winless in March. Suriname, who have drawn on new Dutch-born recruits from leagues in Europe, will face Bermuda on 4 June in a home match in Paramaribo, Suriname.

In all, 30 Concacaf nations are competing in this first round with six group winners advancing to a second round of head-to-head knockout matches. FIFA have established Canada’s pathway for the FIFA World Cup Qatar 2022™ Qualifiers beginning with an initial round of four matches against Group B opponents Aruba, Bermuda, Cayman Islands and Suriname.

“Canada Soccer continues to prioritize the safety for all of our players and staff throughout the global COVID-19 pandemic,” said Peter Montopoli, Canada Soccer General Secretary. “Canada Soccer has established the International Camp Protocols for National Teams which will be adhered to for the hosting of this all-important home match for our Men’s National Team in the FIFA World Cup 2022 Qatar™ Qualifiers. As was executed in Orlando, the match in Chicago will be staged in accordance with the FIFA International Match Protocols supported by the relevant public health requirements.”

Every match in this round is crucial on Canada’s pathway to the FIFA World Cup Qatar 2022™. The official window on the FIFA Men’s International Match Calendar runs 31 May to 8 June. In the first two matches of this round, Canada won their first match 5:1 over Bermuda on 25 March and then 11:0 over Cayman Islands on 29 March.

“We had hoped to play these matches at home with Canadian fans providing the support and momentum to play a tough nation like Suriname in FIFA World Cup Qualifiers,” said John Herdman, Canada Soccer’s Men’s National Team Head Coach. “The reality of the global pandemic and the priority to keep our communities in Canada safe means the match will be played at a neutral site in Chicago with no home advantage, but we will embrace that challenge. Whatever comes at us, we will take it on and do whatever we need to do to advance to the next round.”

From the first round of FIFA World Cup Qatar 2022™ Qualifiers, the Group B winner will face the Group E winner in a second-round, head-to-head series on 12 and 15 June 2021. The winner from that second round then advances to the Concacaf Final Round of eight nations in which each nation will play each opponent twice (once at home and once on the road).

CANADA SOCCER’S MEN’S NATIONAL TEAM PROGRAM
Canada Soccer’s Men’s National Team, two-time Concacaf champions, were one of only four nations that have finished top-six across all three of Concacaf major tournaments across the past three years: fifth place in Concacaf Nations League A and sixth place at both the 2017 and 2019 Concacaf Gold Cups. In 2019 against Concacaf’s top three nations, Canada earned a victory against USA in Concacaf Nations League as well as eliminated both Mexico (U-15) and Costa Rica (U-17) in Concacaf youth competitions.

In the most recent Concacaf Men’s Ranking Index published for May 2021, Canada were ranked fifth amongst all Concacaf nations.