Flanders, Belgium (September 25, 2021) – After competing at her first Olympic Games in Tokyo earlier this summer, winning her first World Tour race at the Simac Ladies Tour and earning both Canadian road titles, Alison’s Jackson breakthrough season continued on Saturday with a 6th place finish at the Road World Championships in Flanders, Belgium.

Jackson rode aggressively throughout the race, managing to stay at the front and to chase down every attack with the main pack. With only 13 kilometers to go, Jackson was part of a 20-rider group and it became clear the finish would come down to a sprint. Although she was too far back to fight for gold, she beat other strong opponents in the sprint, finishing with a solid 6th place, the best Canadian result of the week. 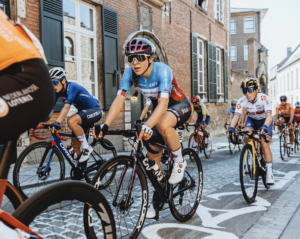 “At the start of the day, the girls [Karol-Ann Canuel and Leah Kirchmann] had a lot of confidence in me and how I’ve been riding so far this season and they wanted to commit to bringing me in the best possible way to the finish,” said Jackson. “With 5-kilometres to go in the top five, I really liked my chances for a sprint but had to play the game and it got a bit messy at the end but really happy with a top-10 finish.”

“It’s my final race of my career and it’s nice to finish it off in Belgium,” said Canuel. “The weather and the crowd was good and it’s a fun course to do. I just wanted to do the best race and I’m happy with how I finished.”

Racing will wrap up tomorrow with the Elite men’s road race at 4:05am EDT on Flobikes.

About Cycling Canada
Cycling Canada is one of the oldest national sport organizations in Canada and has one simple purpose: to inspire Canadians to cycle. Cycling Canada administers programs to promote and grow cycling across the country, hosts national and international events and manages the National Team in all levels of international competition.