Skip to main content
Home Mom and Me: Active Lifestyles Begin at Home!

Mom and Me: Active Lifestyles Begin at Home! 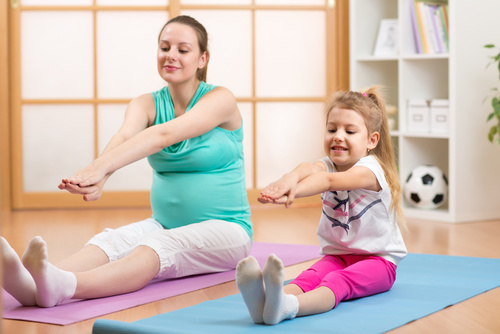 A physically active lifestyle begins to develop early in childhood. Almost 31% of Canadian children and youth 5-19 years of age are overweight or obese and if the current trends continue, by 2040, 70% of 40-year-olds will be overweight or obese. The importance of physical activity at an early age does, however, give us an idea of possible strategies to target the widespread physical activity deficit.

In preschool-aged children, activity levels of mothers are positively associated with those of their children. This mother-child relationship exists throughout the day, for both low and moderate-to-vigorous intensities, and is mutually beneficial: an active mother may encourage her child to be physically active, while an active child may require his or her mother to be more active. The end result is an increase in activity for either, and ultimately, desirable health outcomes for both.

Granted, because of different study designs and the numerous factors at play, it is hard to pinpoint an overarching, general conclusion about the exact relationship between parental and child physical activity. This is especially true when children transition through adolescence and the influence of peers and coaches grows. Parental support, however, is consistently associated with greater levels of physical activity. Co-participation, encouragement, and facilitating participation by providing transportation and equipment all influence children’s physical activity. Rather than these individual behaviours, though, it is the supportive actions and attitudes as a whole that have the largest effect.

With variable outcomes arising from interventions geared towards overweight and obese children, one of the best ways to combat the obesity epidemic may be to take a preventative approach. Children between 5-17 years old should participate in at least 60 minutes of moderate-to-vigorous physical activity every day. Given that early physical activity impacts and promotes the development of a physically active lifestyle, and that the stability of physical activity participation remains moderate to high into youth and adulthood, we should capitalize on this period of growth and learning to develop healthy habits for life. Engaging in physical activity as a family results in a variety of gains for everyone involved, but even if parents are limited in their participation, support for their children’s continued physical activity is instrumental in setting them up for an active life.

The Canadian Society for Exercise Physiology released an evidence-based 24-hour Movement Guideline for Children and Youth in 2016, and have guidelines for all other age groups, too.

Resources for physical activity during pregnancy:

Mothers can also begin, or keep, engaging in physical activity during pregnancy. These SIRCuit articles and SIRC blogs outline the many benefits of exercise during pregnancy, as well as the guidelines for safe participation:

About the Author: Lily is a fourth-year student in the kinesiology program at Western University. With a background in synchronized swimming, she continues to be actively involved in the sport as a coach and varsity athlete.