Skip to main content
Home Coaching boys or girls: Is there a difference?

Coaching boys or girls: Is there a difference? 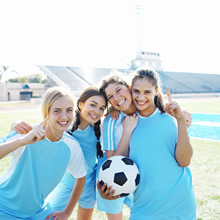 No two athletes are the same. Most athletes have their own ways of approaching practice and competition. As a coach, to get the best out of your athlete you have to get to know them as individuals and as athletes. To do this you have to understand what gets them motivated, their learning style and their feedback preferences.  Most athletes are interested in developing their abilities, as athletes and as individuals. It is important to recognize that there are certain general traits and tendencies that may differentiate males and females that can be useful tools to engage your athletes.

In terms of psychology, males tend to be more analytical, linear and logical in processing information.  They tend to understand and process things by building systems to explain. Generally, they prefer information to be presented in a fact oriented and objective manner. Females tend to like the whole picture meaning they like to understand why they are performing certain task and what they are achieving by doing so. Females are more likely to use both sides of their brain while boys use one side. For girls it is best when information is presented in a larger context.

Males tend to react by jumping into action while females tend to react on an emotional level. How you communicate between genders can make a difference in how your message is received. Females are more interested in how you say things as opposed to what you say.  The tone of your voice and body language is more important to females than the words you are conveying to the team. When you criticize a male’s team they tend to think you are criticizing someone else on the team, in contrast, females tend to internalize or personalize criticism. Females also worry more what others will think of them, thus when communicating your message never single a girl out in front of their peers. Boys enjoy being praised and are likely to take criticism a little better than girls.

In the context of approaching competition and practice, Kathleen J. DeBoer’s article, “Practice Like a Girl, Compete Like Boy,” best explains what coaches need to consider in developing the full athlete. Boys are very competitive so the technical aspect of a sport can be hard to teach. Females sometimes have a hard time competing with their peers thus they are good technical athletes but may lack the competitive edge. Coaches tend to make girls practices more on the technical side and place less emphasize on the competitive aspect. Boys’ practices are more of a competition and less technical. But in order to develop the full athlete, coaches should also work on weaknesses that exist between genders.

Coaching is more than running practices and creating game strategies. It is also about developing athletes by motivating and getting the best out of them. Understanding general tendencies and traits that exist between male and female athletes are one way to help develop the full athlete. These generalizations can also help a coach in knowing their athlete as a player and as an individual.