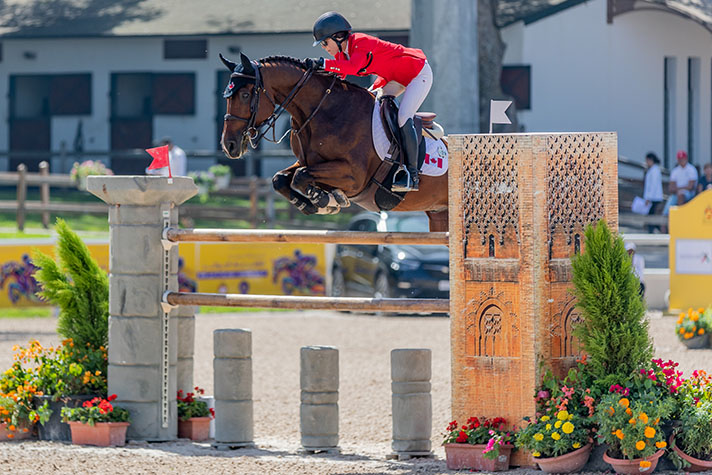 The CSIO 4*-W Rabat show jumping tournament was the second of three stops on the Moroccan Royal Tour which sees horses and riders competing at three different venues – Tétouan, Rabat, and El Jadida – over a three-week period. In Rabat, competition took place at the facilities of the Royal Moroccan Federation of Equestrian Sports.

Another newcomer to the Canadian Show Jumping Team, Liz Bates, was next in riding Chronos 31, a 10-year-old Holsteiner gelding (Casall x Claudio) owned by Breakaway Equestrian BVBA. The 30-year-old from Toronto, ON, dropped a rail at the second element of the triple combination set closely alongside the hospitality tent and also picked up one time fault for exceeding the 78-second time allowed.

Chris Sorensen, 37, of Caledon, ON, was third in the rotation for Canada and put 12 faults on the score board, which would be dropped when Tiffany Foster, 35, of North Vancouver, BC, produced a clear effort with Figor, a nine-year-old Dutch Warmblood gelding (VDL Groep Zagreb x C-Indoctro) owned by Artisan Farms LLC.

Opening and closing with clear rounds and only counting the five faults posted by Bates, Canada sat in fourth place at the end of the half-way stage. Brazil led the way with a clear scoresheet followed by Egypt and Switzerland who were counting one time fault apiece.

The action continued to heat up in the second round with Timm dropping a rail at fence 10 while Bates left all the rails in place but again picked up one time fault. Sorensen improved the second time out with Emperor Claudius, a nine-year-old Anglo-European gelding (Zilando x Temple Sandor Z) owned by Highbranches Group. The pair hit a rail coming into the triple combination and incurred a time fault to add five faults to the Canadian Team’s total. When Foster and Figor failed to clear the open water and knocked down the vertical that immediately followed, also picking up one on the clock, their nine-fault tally was discounted from the team total, leaving Canada to count 10 faults in the second round.

With only time faults to count in the second round, Egypt moved to the top of the leaderboard to claim victory with a total of four time faults, having never knocked a rail down over two tough rounds of jumping. Switzerland took second with five faults. Italy and Brazil both finished on 14 faults with Italy doing it in the quickest combined time to take third place. Canada finished fifth behind Brazil with a two-round total of 15 faults.

Sunday’s Nations Cup acted as an Olympic qualifying event for countries in Fédération Equestre Internationale Group F. A total of six countries – Egypt, Jordan, Morocco, Qatar, Saudi Arabia, and the United Arab Emirates – started in the hopes of earning one of two tickets to the 2020 Tokyo Olympic Games. While Egypt easily earned its Olympic berth with the win, Qatar filled the second invitation on offer by placing eighth in the final standings with a total of 28 faults.

“We were so close and were in the mix for a podium result until the very end,” said Mark Laskin, Chef d’Équipe of the Canadian Show Jumping Team. “To finish fifth out of 14 teams in an Olympic qualifying event is very commendable, especially considering that two of our riders and three of our horses were making their Nations Cup debut.

“It has been a great experience these past two weeks in Morocco, all building up to the Nations Cup,” continued Laskin of Langley, BC. “Moving forward, I know all of our horses and riders will have benefitted from the experience.”

The Nations Cup of Rabat marked the Canadian Show Jumping Team’s final appearance of the 2019 season. Its best results of the year came on home soil when Canada won the $400,000 CSIO 5* Longines FEI Jumping Nations Cup™ Canada in Langley, BC, in June and placed second in the $530,000 BMO Nations Cup in September at the CSIO 5* Spruce Meadows ‘Masters’ tournament in Calgary, AB.