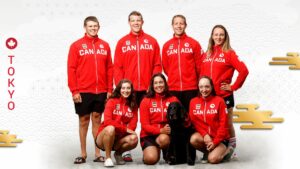 Kyle Fredrickson (Duncan, BC), Bayleigh Hooper (Chatsworth, ON), Victoria Nolan (Toronto, ON), Andrew Todd (Thunder Bay, ON) and coxswain Laura Court(St. Catharines, ON) will race in the PR3 mixed coxed four (PR3Mix4+) after earning their spot with a victory in the final Paralympic qualification event held in Italy in June.

The crew also finished fourth at the 2018 world championships.

Canada earned a bronze medal at the Rio 2016 Paralympic Games in this event, with Nolan and Todd returning from that team. Fredrickson, Hooper, and Court will be making their first Paralympic appearances.

“I am honoured to have the opportunity to represent Canada at my fourth Paralympic Games,” said Nolan. “I am very fortunate to be part of such a strong group of athletes who have dedicated so much and sacrificed so much.”

Jessye Brockway (Mill Bay, BC) and Jeremy Hall (St. Paul, AB) will be making their Paralympic debuts, racing together in the mixed double sculls (PR2Mix2x). The duo came together just two years ago. Hall was on the lookout for a female partner as his classification, PR2, is not a Paralympic event in single sculls and so his only Paralympic opportunity was to qualify in the double sculls event. Brockway answered the call; while she had competed in other Para sports, this was her first time rowing. At the 2019 world championships, they finished 11th.

At the final Paralympic qualifier in June, Hall and Brockway needed a top-two finish to secure their place in Tokyo, and just missed out in third place. But their Paralympic dreams were renewed after Canada received a bipartite commission invitation slot for the mixed double sculls.

“I am absolutely thrilled to be nominated to my first Paralympic team. Having grown up with severe hemophilia, this is not something I would have ever thought possible,” said Hall. “To say this is a dream come true would be a massive understatement. I cannot wait to line up in Tokyo with Jess and proudly represent Canada on the biggest stage.”

“I am very proud of our team heading to Tokyo,” said John Wetzstein, Para rowing head coach. “It has been a long journey and these talented athletes are ready to get to that start line and make Canada proud. The goal is to put ourselves in a position to deliver the best performance in the A Final.”

Rowing has been part of the Paralympic program since 2008 and features four events – women’s single sculls, men’s single sculls, mixed double sculls, and mixed coxed four. Canada captured its first medal in the sport at Rio 2016, a bronze medal in the mixed coxed four courtesy of Curtis Halladay, Meghan Montgomery, Nolan, Todd, and coxswain Kristen Kit. Nolan is Canada’s most prolific Para rower, as she has competed at each Paralympic Games since the sport debuted (Beijing 2008, London 2012, Rio 2016, and soon to be Tokyo 2020).

“Congratulations to the entire Para rowing team for earning your spots at the Paralympic Games!” said Stephanie Dixon, chef de mission, Tokyo 2020 Canadian Paralympic Team. “I can’t wait to cheer on both of Canada’s boats at the Games. These seven fantastic athletes have put in so much hard work and effort to make it to the Games, and they will make Canada proud no matter what!”

The postponed Tokyo 2020 Paralympic Games will take place August 24 to September 5, 2021 in Japan. Canada is expecting to send a team of approximately 130 athletes, and audiences across the country will be able to follow all the action live through coverage from the Canadian Paralympic Media Consortium, including broadcast partners CBC/Radio-Canada, AMI, and Sportsnet, and digital partners Twitter, Facebook, and MXZN.