Town of Rivière-du-Loup named Partner of the Year; Debby Fisher, Marc Poulin and Danielle Ferland recipients of national awards for their contributions to speed skating

OTTAWA, ONTARIO – Speed Skating Canada announced today the annual award winners in the coaching, officiating, volunteering and partnership categories. Calgary’s Debby Fisher and Marc Poulin were named Coach of the Year and Official of the Year, respectively, while Sherbrooke’s Danielle Ferland is this year’s Volunteer of the Year. Meanwhile, the town of Rivière-du-Loup brings home the Sport Champion Award as Partner of the Year. 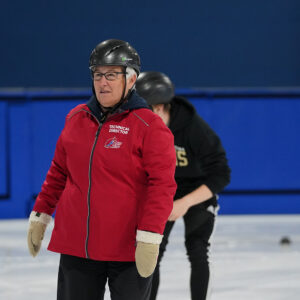 The Jack Walters Award for Coach of the Year is presented to a coach who has demonstrated sustained leadership within the coaching environment, at either the grassroots or high performance level, along with meaningful, long-term involvement on the club, regional, provincial or national stages.

This year’s Coach of the Year is Calgary’s Debby Fisher, a well-respected leader who has made countless contributions to the speed skating community at the local, provincial and national levels over the past three decades. Debby is an honoured builder within Speed Skating Canada’s Hall of Fame (2005) and helped develop the organization’s Coaching Education Program nearly a decade ago. As the current Technical Director with the Calgary Speed Skating Association, she has spent considerable time providing mentorship to the other members coaching staff, all while continuing to deliver on-ice programming to athletes. She has also played a leadership role in the development of a new club in nearby Seton, providing their volunteers with mentorship and technical advice. This past season was quite difficult for the CSSA, which had to overcome COVID-19 related challenges and the closure of the Olympic Oval, which left them without ice to train on. Debby rallied the coaching staff and oversaw the development of an on-line training program, which was supplemented by on-ice and in-line training at alternate locations, when possible. The club received praise from their membership for their flexibility and adaptability, which helped keep kids engaged and training the whole year despite the pandemic.

The Coaching Award of Excellence is awarded to those who have made meaningful contributions to the sport of speed skating in the role of coach. This year’s recipients are Patti Walsh (Ont.), Clement Cauchon (Que.), Gregor Jelonek (Que.). 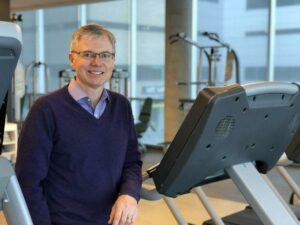 The René Marleau Award for Official of the Year is presented to an official who has displayed sustained leadership within the officiating environment and demonstrated meaningful, long-term involvement at the club, regional, provincial or national level.

This year’s Official of the Year is Calgary’s Marc Poulin, an international level long track starter who is also a consistent presence at domestic events throughout the country. Marc spearheaded the introduction of online training for Canadian officials this past season after realizing they would not get the opportunity to attend competitions due to the COVID-19 pandemic. He knew it was important for them to stay fresh and ready to officiate when competitions returned. For the long track starters clinic, he helped organize the presence of two ISU members who spoke to the group. In addition to his role as a high level official, Marc is also involved in an administrative capacity with Speed Skating Alberta, where he is the Vice President of Skater Development, and with the Calgary Grizzlies Speed Skating Club, where he is a member-at-large on their Board of Director.

The Guy Marcoux Officials Award of Excellence is awarded to those who have made meaningful contributions to the sport of speed skating in the role of official. This year’s recipients are Rick Hunt (Ont.) and Michel Dumont (Que.) 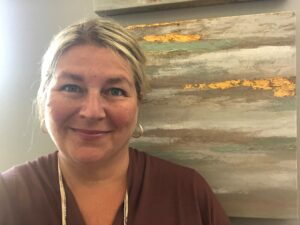 The Jean Grenier Award is bestowed upon an outstanding volunteer or administrator who has made invaluable contributions to the betterment of speed skating in Canada. Winners of this award are unsung heroes who work tirelessly in planning competitions, clinics or events to help increase awareness, promote participation and foster athlete development.

This year’s Volunteer of the Year is Danielle Ferland, the current president of the Club de patinage de vitesse de Sherbrooke. Danielle has been a board member with the club for two years but started volunteering with the organization the moment her daughter enrolled six years ago. She recently completed her first year as club president; a year marked by COVID-19 related challenges which required a lot of agility, adaptation, determination, leadership and ingenuity. Despite fast-changing public health restrictions, Danielle was able to mobilize fellow club administrators and coaches to continuously improve program offerings, which evolved from training outdoors in groups to training alone virtually. Thanks to her leadership, the club was able to offer its members suitable sports programming throughout the year. Danielle’s professional life keeps her quite busy, but it does not prevent her from using her free time to play the central role with the club. This level of involvement speaks to the importance she places on the next generation, their development and fulfillment. With all challenges the club was presented with this past season, it would have been very easy to quit but Danielle went out of her way to ensure the skaters had a quality training environment throughout this difficult period.

Sport Champion Award (Partner of the Year): Town of Rivière-du-Loup

The Sport Champion Award for Partner of the Year is bestowed upon a sponsor, supporter or partner who has demonstrated sustained commitment to advancing the sport of speed skating in Canada at the club, regional, provincial, or national level.

This year we recognize the Town of Rivière-du-Loup, which for 50 years has supported the activities of the Loupiots speed skating club as a partner of countless events, development camps, as well as national, provincial and regional championships. In the past year, the exemplary partnership with the city continued with their incredible support of the club’s two primary projects: the development of a long track program and the construction of an Olympic size ice for short track. Despite the uncertainty of the pandemic, the town has committed a $9.5 million dollar investment to modify one of its arenas and replace it with an Olympic ice dedicated to speed skating and figure skating. They have also been tremendous partners throughout the COVID-19 pandemic, working alongside the club find solutions that would allow members to continue training despite the rapidly changing government restrictions and health protocols. Thanks to their proactive and flexible approach, the Loupiots were able to offer on-ice programming from July 2020 to April 2021, without interruption.