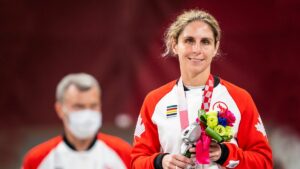 Tokyo, August 27, 2021 – Canada has won two medals for the third consecutive day at the Tokyo 2020 Paralympic Games, bringing the nation’s total to six following the conclusion of competition on Friday August 27.

“It’s very rewarding to win this medal. There’s been a lot of hard work over the last five years; especially the last year and a half has been crazy,” said Gagné.

“I thought of so many people once the competition was over. All the Senseis over the years, my family, of course my coach Andrzej Sadej. It’s wonderful to know my 85-year-old grandmother will be able to see this.”
In Para swimming, Danielle Dorris (Moncton, NB) and Camille Bérubé (Gatineau, QC) finished fourth and fifth in the women’s 200m individual medley SM7 final. Dorris, who was in second position heading into the final 50m, just missed out on the podium as she was out-touched at the wall by five-hundredths of a second for third place. For Bérubé, it was a landmark first final in her third Paralympic Games; it was also Dorris’ first in her second Games.

“I really enjoyed that, it was a lot better than the morning, I swam it a lot better, which was my plan, so I’m very happy with it,” said Dorris.

“It was a really good race; I had a lot of fun,” said Bérubé. “It’s the fastest time that I’ve gone in probably five years and a best time in this sport class, so I’m definitely thrilled with that and it’s a great start to the rest of the week.”

Seventeen-year-old Nicholas Bennett (Parksville, BC) qualified for his maiden Paralympic final in the men’s 200m freestyle S14 and finished sixth, setting a new Canadian record of 1:56.52. Fellow final first-timer Angela Marina also earned a sixth-place result in the women’s 200m freestyle S14. Matthew Cabraja (Brampton, ON) did not advance to the final in the men’s 50m freestyle S11.
The first day of Para athletics competition saw seven-time Paralympic medallist Brent Lakatos (Dorval, QC) take to the track for his opening event of Tokyo 2020. He qualified for the men’s T54 5000m final, finishing second in his heat with a time of 10:15.15. The final will take place on Saturday.

“Overall, it went well,” said Bolton, age 18. “I was a little nervous at the beginning, but I’m glad I was able to pull it together. Now that I’ve shaken the nerves out, I’m going to go back, do some disc training and hopefully pop out some new personal bests. The Paralympics are very big. It’s a little overwhelming. There are lots of people and lots of staff doing a good job of keeping us all on track.”

MEDIA RESOURCES: Resources to cover the Tokyo 2020 Canadian Paralympic Team, including athlete bios, flash quotes, and access to photos and video highlights, are available at Paralympic.ca/tokyo-2020-media.

About the Canadian Paralympic Team: Canada is represented by 128 athletes competing in 18 sports at the Tokyo 2020 Paralympic Games, taking place August 24 to September 5.

[LINK] LIST OF MEDIA CONTACTS BY SPORT
For interview requests with the athletes during the Tokyo 2020 Paralympic Games, please contact the specific sport media attaché.