Montreal, October 25, 2020 – Shady El Nahas, the final Canadian to compete at the Budapest Grand Slam, ended his day in the Hungarian capital on a high note, claiming the bronze medal in the under-100 kg category on Sunday.

He was the fourth Canadian to be decorated in Hungary after Jessica Klimkait (-57 kg), Antoine Valois-Fortier (-81 kg) and Arthur Margelidon (-73 kg) won gold, silver and bronze, respectively.

“I’m really happy with my performance today,” stated El Nahas, who is ranked seventh in the world in his weight division. “For the first time, I felt as strong, if not stronger, as the world champion and other athletes. I wanted to use this competition to assess where I stood, and I’m really proud of how I did today.”

El Nahas won his first two matches by ippon against Hungary’s Zsombor Veg and Egypt’s Ramadan Darwish. After his quarter-final loss to Russia’s Arman Adamian, who later snagged the silver medal, he moved on to the repechage, where he quickly disposed of Hungary’s Miklos Cirjenics by ippon. In his final bout, he overpowered Toma Nikiforov of Belgium by waza-ari to secure his spot on the third step of the podium. 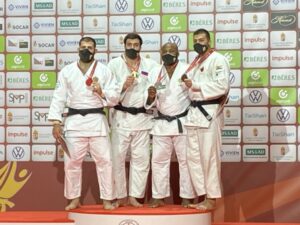 The 22-year-old had been looking forward to participating in the first international tournament to be held since the pandemic began.

“Normally, I’m very nervous, but this time I was excited. Of course I wanted to win, but it was even more important to me to have fun,” he explained. It’s an attitude he intends to maintain in the future. “This is going to be my new mentality. I need to keep improving, and there are still elements of my judo that need working on, but I’m getting better, which is a great sign.”

Four of the five Canadians who competed in Budapest are going home with a medal, while Catherine Beauchemin-Pinard placed fifth in her weight class of under-63 kg. These results demonstrate that the Canadian contingent was more than ready to resume international competition after being forced to take a long break due to COVID-19.

Coach Sasha Mehmedovic, who accompanied the athletes to Europe, was pleased with what he saw. “As coach, I’m very satisfied with our team’s performance this weekend. Everyone was in great shape.”

However, he could sense that the judokas were nervous after such a long absence from international tournaments. “This was the first competition for everyone since February and there was a lot of stress. These results show that we had the ability to prepare well during this difficult period, which gives us confidence for future events.”