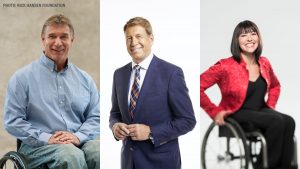 Ottawa, June 16, 2020 – A trio of three well-regarded members of the sport community are the first individuals named to the Paralympic Foundation of Canada (PFC) honorary board, the charitable organization announced on Tuesday. Senator Chantal Petitclerc – one of the most decorated Paralympians in Canadian history – alongside Paralympian and disability advocate Rick Hansen and renowned Olympic and Paralympic broadcaster Scott Russell join the honorary board to continue their powerful work promoting the Paralympic Movement in Canada.

“Senator Chantal Petitclerc, Rick Hansen and Scott Russell each bring with them an incredible and diverse understanding and personal history of Para sport,” said Jim Westlake, chair, Paralympic Foundation of Canada. “We are thrilled to welcome them as the inaugural members of our Honorary Board of Directors and are excited to work with them to further ensure that all Canadians with a disability can access sport.”

The honorary board will be comprised of Canadians who believe in Para sport and ensuring that sport is available and accessible for every person across the country, and recognizes those who have already shown great service and dedication to elevating the Paralympic Movement. A volunteer position appointed by the PFC’s Board of Directors, the honorary board will help keep the Paralympic Movement strong and growing in Canada.

Senator Chantal Petitclerc is one of the most successful Para athletes ever, competing at five Paralympic Games (1992, 1996, 2000, 2004, and 2008) and winning 21 medals – including 14 gold – in wheelchair racing. She was awarded the Lou Marsh Trophy as Canada’s best athlete of the year in 2008. Following her retirement from sport, she has been a broadcaster, public speaker, chef de mission of the Rio 2016 Canadian Paralympic Team, and was named to the Canadian Senate in 2016.

“Diversity is a strength, never a weakness. When we choose to include, we win as a country, as organizations, as individuals. That, to me, is the definition of Para sport in Canada: inclusion, diversity and togetherness,” said Senator Petitclerc. “It is important to me to stay involved with the Paralympic Movement. Our new generation of champions is valuable and has important strengths and voices that need to continue being respected and heard. Together, the veteran athletes, the rookies, and everyone behind the scenes, we are united and we can make a difference.”

Known for his 40,000 kilometre Man in Motion World Tour, Rick Hansen has played many different Para sports throughout his life and is a six-time Paralympic medallist in wheelchair racing, competing at the 1980 and 1984 Paralympic Games. He is a tireless advocate for creating a more accessible and inclusive world, and has been advocating for the rights of people with disabilities and raising money to improve their lives for nearly four decades.

“Thanks to the Paralympic Foundation of Canada and Canadian Paralympic Committee, athletes have more opportunities to participate in sport, and represent their communities in regional, provincial and international competitions,” said Hansen. “The Paralympic Movement is a tremendous vehicle to create awareness of the potential of people with disabilities, break down barriers to accessibility and create social change towards an accessible and inclusive society where people with disabilities are equal.”

“Sport is the universal language which is easily understood by people of every race, faith, circumstance, orientation, and ability,” Russell said. “I have always believed that the power of sport should be accessible to everyone. My continued involvement in Canada’s Para sport movement is my commitment to that ideal.”

The Paralympic Foundation of Canada is a registered charitable foundation and the philanthropic arm of the Canadian Paralympic Committee. Founded in 2015, the PFC believes that every single Canadian should be able to imagine themselves at the start line, regardless of ability.

About the Paralympic Foundation of Canada:Paralympicfoundation.ca
About the Canadian Paralympic Committee: Paralympic.ca