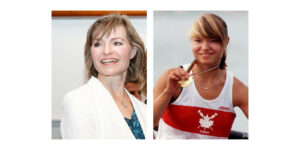 Three-time Olympic gold medallist Kathleen Heddle passed away peacefully following a long battle with cancer surrounded by her loved ones at home in Vancouver, BC, on January 11, 2021. Rowing Canada Aviron (RCA) released the somber news at the request of Kathleen’s family – a mournful day that will forever be etched in many minds and hearts, a person that will forever be idolized and admired. Kathleen was not only revered for her historic Olympic accomplishments, she was adored for her quiet leadership, humbleness, and grace.

We memorialize Kathleen Heddle with tributes and memories from many of her closest rowing friends, teammates, coaches, and those who have been deeply impacted by Kathleen’s everlasting legacy.

There are too many fond memories and her role in the success of our women’s rowing teams from 1987 to 1996 is an obvious one.

My favourite story was when she offered me a ride to the Tsawwassen ferry terminal in February of 1995. I was coaching rowers in Vancouver and Victoria and Kathleen had not decided whether she would retire from rowing after being a World Championship silver medallist in 1994. I knew pressure from me would not work and we spent all our time just talking about her family and her dreams. Just before I got out of the car, I asked the question that I had to ask: “Will she row until the 1996 Olympics?” She paused and said yes. This memory summed up Kathleen. She made a big decision but had no idea how much it meant to so many people. She always understated the powerful influence she had over others. I believe to this day she may have always lived her life that way. She was the greatest but never acted that way.

Another favorite story, about four weeks prior to the 1996 Olympics, as Marnie McBean and Kathleen prepared for their races, I asked them, “What kind of a coach do you want me to be at the Olympic Games?” Marnie had lots of ideas and this worked out well due to her role as bow seat in their double. In her role she organized a lot of the racing and training activities. Kathleen said, “Al, we have worked well together for 7 years but I do not really need anything.” She re-enforced what I always knew. It went back to advice, one of her many coaches named Dick McClure said to me in 1990, “You will not need to coach her; she is a natural.”

Words that describe how much I admired her include:
Humble, graceful, funny, talented, family oriented, comfortable with herself.