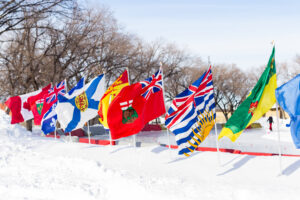 OTTAWA, ONTARIO – Canada’s speed skating community is getting a bold new look. As their refreshed brand identities roll out from coast to coast, the country’s Provincial and Territorial Sport Organizations (PTSOs) aim to create a sense of togetherness and ensure that speed skating is presented consistently and professionally to audiences at all levels.

Over the past eight months, Speed Skating Canada has spearheaded a project to develop new logos and branding materials for its thirteen PTSOs, in alignment with the updated national brand that was launched in November 2019. The initiative supports the goal of Organizational Excellence outlined in Speed Skating Canada’s 2018-2023 Strategic Plan, helping speed skating organizations nationwide collaborate to build the sport’s profile and inspire the community.

In addition to the united visual identity, PTSOs will transition to a common naming convention (“Speed Skating [Province/Territory]”), creating even further alignment across the system. Several provinces and territories, including Manitoba and the Northwest Territories, will transition to their new look later this season. The remaining PTSOs will adopt the aligned identity at a later date of their choosing.

Each of the PTSO brands includes a unique icon and colour palette which reflect the individual identity of the province or territory. The suite of logos was developed by Vancouver-based design agency Will Creative Inc., who leveraged their previous work on the Speed Skating Canada identity to develop one of the few aligned brands for amateur sport across the country.

Speed Skating Canada will unveil the new PTSO logos on its social media channels as they are launched in each province and territory. More information about the national brand that was the catalyst for this work is available at www.speedskating.ca/brand.

“We believe there is immense value in creating a cohesive look and feel across our sport. Our collective brand power and recognition is far greater when we present a visually united front. Speed skating takes pride in presenting itself professionally, which fosters confidence in our community and all who connect with us. Now that we are a visually harmonious family, we look forward to collaborating with our provincial and territorial partners in the development of high-quality marketing materials that attract new audiences to our sport.” – Nicole Espenant, Director, Marketing and Engagement, Speed Skating Canada

“There is real strength in numbers across the provincial and territorial speed skating organizations and that collective unity is now graphically reflected in a unifying logo system. Each PTSO shares the iconic Speed Skating Canada tracks whilst reflecting their uniqueness with an icon connecting to the province or territory. This new visually aligned Speed Skating Canada family can now truly push the boundaries of individual speed, strength, and strategy together.” – Nick Richards, Founder and Creative Director, Will Creative