Montreal, September 10, 2021 – Judo Ontario saw their efforts pay off handsomely this summer, with impressive results from Jessica Klimkait and Shady El Nahas at the Tokyo 2021 Olympic Games. Far from resting on its laurels, the provincial organization has now hired experienced South Korean coach An Jeong-Hwan to further enhance their high-performance program, which has been steadily growing since its establishment in 2012.

“Coach Hwan has an impressive background, and to have his experience and knowledge at Judo Ontario is definitely a huge asset to our organization,” said James Millar, Ontario’s head coach.

Trained in South Korea and Japan in his youth, Jeong-Hwan had a brilliant career as a judoka that took him onto international podiums, after which he then transitioned into a coaching career.

“I have a lot of experience as a coach, especially in Japan and South Korea. I’ve also coached the South Korean and Spanish Olympic teams,” notes Ontario’s new coach, who also has a Masters of Science in Physical Education. “I’d like to take the strengths of all these nations and bring them together to create a winning combination for Ontario athlete. 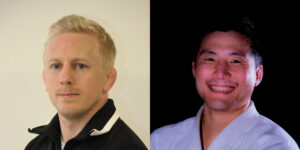 Coach Jeong-Hwan mentioned the two reasons why he accepted the position: “I’ve always wanted to pursue my coaching career internationally, and this was a great offer from Judo Ontario that I really couldn’t refuse. As well, my wife is Canadian and after having coached the national team in South Korea, I really wanted the chance to coach at that level in Canada, too.”

Nicolas Gill, Judo Canada’s Executive Director and High Performance Director, was happy to introduce the South Korean coach to Judo Ontario. “Regional training centers are an essential high-performance athlete development tool. To have a coach of An’s caliber at the Toronto center is exceptional. He has an amazing background as a coach, but also as an athlete, all of which will help foster the dreams of Ontario’s young judokas to follow in Jessica’s and Shady’s footsteps.

In the position since last summer and adjusting to his new work environment, An Jeong-Hwan already sees the potential of Ontario’s judokas and is very excited about the future. “I’d like to build on the solid foundations that have been built over the past few years, and go further by creating an even more intensive program. That’s my goal as a high performance coach.”

“I want athletes to grow in terms of training, and maximize their skills. I want to see them win Canada medals at the World Championships and Olympic Games,” says the communication-oriented coach.

“I’m the kind of coach who works hard to find answers for my judokas. I talk with my athletes about their challenges, as well as their needs, and I’m always looking for ways to improve. I personally continue to study and train, in order to further develop my skills.

An Jeong-Hwan’s mandate will be to ensure that Ontario’s high performance program continues to evolve in the right direction, in step with the rest of the organization. The challenge will be for the province’s young judokas to follow in the footsteps of Whitby’s Jessica Klimkait and Shady El Nahas of Toronto, who won bronze and fifth place respectively at the Tokyo 2021 Olympic Games.

The latter two judokas and their outstanding results are ample proof that the Ontario program is well established and structured – now Judo Ontario is looking forward to reaping the benefits of their efforts.

“Jessica and Shady have both performed exceptionally well over the last 18 months, and these results will have a major impact on the next generation, especially in terms of young women’s participation in the sport. Jessica trained with us, and the athletes who follow her will be trained in the same program. She’s shown that if you have talent and a good work ethic, you can be successful. It’s a great example to have,” summarizes James Millar.

Ontario’s head coach is optimistic about the future – and with good reason, “It’s looking very good for our program. It’s not just Jessica and Shady who are shining – other young athletes have done well and are making the transition to the national center. We expect that trend and that progress to continue over the next few years.”

Looking for a judo club near you? Visit this page: judocanada.org/club-finder-tool/