Montréal, September 28, 2021 – Olympic medallists Jessica Klimkait and Catherine Beauchemin-Pinard will be heading out

to greet Canadians across the country as of October 1st, as part of a national tour that kicks off in Abbotsford, British Columbia.

Judo Canada’s exciting initiative is designed to use recent Olympic enthusiasm to stimulate interest in and revitalize judo across the nation, given that the pandemic had previously prevented sports participation.

“The provinces have the opportunity to host our judokas, who are of course Olympians! Everyone – the media, schools, public figures – can meet our Tokyo 2021 Olympic Games medallists,” notes Patrick Esparbès, Judo Canada COO. 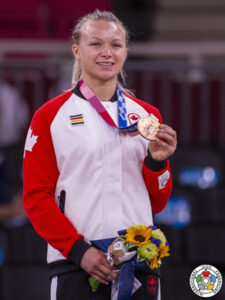 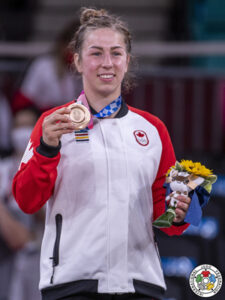 In Abbotsford, Klimkait and Beauchemin-Pinard will get hands-on with young athletes, offering mini-camps focussed on judo techniques. Without a doubt, it’s a fabulous opportunity for young judokas to share the tatami with and receive input from two Olympians.

“Above all, we want to demonstrate that judo is something that girls do well, and plus, it’s an exciting Olympic sport, so you can aim high. We want people to see that judo a lot of fun, and anyone can do it,” adds Esparbès.

Tour activities are determined by the host-province, meaning that Klimkait and Beauchemin-Pinard will be able to participate in different events and activities from one province to another.

“I wouldn’t want to speak on their behalf (Klimkait and Beauchemin-Pinard), but they’ve said they’re happy to promote our sport across the country, and that they’re honoured to be the sport’s ambassadors. In fact, Catherine has already had a lot of speaking engagements in schools, and is looking forward to continuing on with it,” says Esparbès.

Media are invited to attend the first stop of the tour, an autograph and Q&A session on October 1, at 6:00 p.m., at St. John Brebeuf High School in Abbotsford, B.C.

The tour is expected to continue throughout the Autumn; details about additional dates will be announced when available.