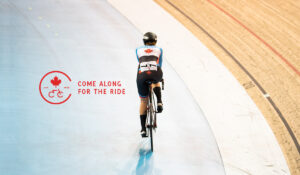 The month of October usually marks the transition between the end of the mountain bike and road seasons and the start of the cyclo-cross season in Europe and Canada. This year, riders have had to adapt to a change in race schedules, complex travel requirements and unpredictable weather, while still managing to pull off impressive performances across the board.

On the road, Mike Woods continued to perform by winning stage 7 of the Vuelta a Espana and placing second on stage 6, while three Canadians finished in the top-5 at the 2020 UCI Mountain Bike World Championships. Meanwhile in Canada, all of the track endurance and sprint programs are coming together at the Mattamy National Cycling Centre for a month-long camp ahead of the 2021 season.

Although it won’t be the usual off-season for many, the winter months offer time to keep building for what is to come next year. Over the next months, our community will have the chance to ride with top National Team athletes during the Cycling Canada weekly rides and to compete against our e-sports squad during the E-Sports World Championships Practice Races taking place in the next weeks. In these times, we can still come together to push, support and learn from one another. 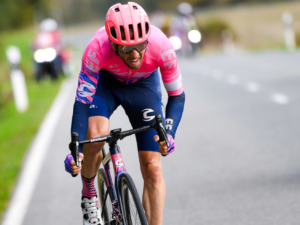 CYCLING CANADA ANNOUNCES SELECTION FOR UCI ESPORTS WORLD CHAMPIONSHIPS
The inaugural UCI Esports World Championships which are set to take place on December 8-9 will feature a total of seven Canadian athletes from diverse cycling backgrounds. Canada was awarded a quota of three women and three men, plus one men’s wildcard entry, based on the UCI Road Rankings, the number of riders registered in the Registered Testing Pool, and the number of eligible riders on the Zwift platform.

MIKE WOODS WINS STAGE 7 OF THE VUELTA A ESPANA
Mike Woods continued his 2020 season comeback at the Vuelta a Espana, where he won a tough stage 7 after finishing second on stage 6. Since breaking his femur in March at Paris-Nice, Woods has been on the podium five times, including twice at Tirreno-Adriatico, twice at the Vuelta a Espana and once at La Flèche Wallonne.

DH SEASON WRAPS UP
The downhill season kicked off at the 2020 UCI Mountain Bike World Championships and was followed by four rounds of racing in Maribor, Slovenia and Lousa, Portugal. Canadian athletes got excellent qualifying results, with former Junior World Cup Champion Finn Iles also placing fourth in Round 2 in Maribor. CYCLING CANADA LOOKING FOR A CHIEF SPORT OFFICER
Cycling Canada is seeking a Chief Sport Officer to join the organization. The CSO will be an integral part of the senior leadership team with overall responsibility for designing, implementing, monitoring and leading all elements of Cycling Canada’s sport programs from entry level to the Olympic and Paralympic teams. The application deadline is November 6. 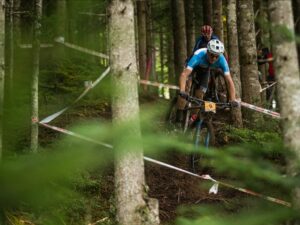 CYCLING CANADA EXPANDS VIRTUAL CYCLING OPPORTUNITIES
Cycling Canada is excited to announce an expanded multi-platform virtual cycling calendar for the 2020/2021 winter season. Cycling Canada’s virtual cycling events kick off on November 2 on the Zwift platform with the introduction of the Cycling Canada “Weekly Tune-up” group ride series and “Wednesday Night Race Series”. Rides will be led by Cycling Canada athletes, coaches and members of our community and will be an amazing way to stay motivated this winter.

RBC TRAINING GROUND GOES VIRTUAL
RBC Training Ground has been an important part of Cycling Canada’s recruiting process and the series is now more accessible than ever. This year, testing can be done at home and submitted through the RBC Training Ground website. The deadline to submit applications is December 1.

We are proud to be part of a dynamic and outstanding cycling community whose many achievements and contributions go beyond performances on the bike. In an effort to recognize some of these many noteworthy achievements, Cycling Canada would like to highlight the following individuals and accomplishments:

UPCOMING COURSES AND WORKSHOPS
A number of virtual development opportunities are available for coaches every month. The NCCP Performance Cycling Competition Development Workshop is accepting applications until November 10, with workshops taking place on November 17, 19, 24, 26 and December 1 & 3.

WISE FUND GRANT
The Wise Fund Grant is dedicated to creating equitable opportunities for women and girls to participate and lead in sport. Organizations have until November 9 to apply for a grant.

CYCLING CANADA MERCH: NEW MASKS NOW AVAILABLE
Cycling Canada still has a few hoodies, crewnecks and socks left in stock to keep you warm this winter! Additionally, we have released a brand new CC reusable and adjustable face mask which is available in limited quantities.

Cycling Canada is proud to announce an exciting new partnership with Tissot, who will be joining Cycling Canada as the organization’s Official Timekeeper. Since 1853, Tissot has been a leader in Swiss Made timepieces with strong roots in the sport of cycling as partners of the UCI and the Tour de France. Follow Cycling Canada’s social media channels for details on member-exclusive Tissot promotional offers in the coming weeks!

The Shifting Gears blog provides a platform for our staff, athletes, board and community to write about interesting topics and ideas. Last month, Shifting Gears tackled: Seven Tips to Win at Adventure Riding this Autumn and Developing the Future of Cycling in Canada. If you are passionate about cycling and interested in contributing to the blog, please reply to this email.