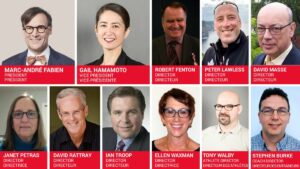 Ottawa, March 12, 2021 – The 2021-25 Canadian Paralympic Committee (CPC) Board of Directors was officially elected on Friday, with incumbent president Marc-André Fabien and vice-president Gail Hamamoto both confirmed for a second term.

The new Board was elected by CPC’s 27 national sport organization members during CPC’s Annual General Meeting, hosted virtually Friday afternoon. Fabien and Hamamoto, both seeking to continue in their leadership positions, ran unopposed.

“It is a great honour and privilege to have the opportunity to serve as president of the CPC for another four years,” said Fabien. “At the heart of my passion for the Paralympic Movement is the athletes, their stories, and their pursuit of excellence, which is a source of pride for all Canadians and drives all of us in the Paralympic community to grow and improve. I am thrilled to continue working alongside the NSOs, athletes, and coaches, as well as our sport, corporate, and media partners. Together we have achieved so much, and with four major Games in the next four years, there is much more to do as we seek to advance Paralympic sport in Canada further.”

Seven directors were elected to the Board, selected from a pool of 14 candidates: Robert Fenton, Peter Lawless, David Masse, Janet Petras, David Rattray, Ian Troop, and Ellen Waxman. Fenton and Waxman have been re-elected for another term, while the other five directors will be joining the Board for the first time.

Tony Walby, chair of the Canadian Paralympic Athletes’ Council is returning as the Athlete Director on the Board, while Stephen Burke, chair of the CPC Coaches Council, retains his position as Coach Director.

“Our sport system is in the midst of an unprecedented time period, and as vice-president I am pleased to be able to help CPC navigate the next four years,” said Hamamoto. “As stewards of the Paralympic Movement, it has never been more important to focus on the work towards our goal of being a world-leading Paralympic nation and ensuring that safe, accessible sport for people with a disability remains a priority. The upcoming quadrennial will certainly have its challenges, but it also holds so much promise and opportunity to innovate and invoke positive change. I look forward to continue working with all of the incredibly valued members of our sport community to create a brighter future.”

The newly elected 2021-25 Board of Directors will connect for their first official meeting later this month. For more information on the Board, please visit Paralympic.ca/board-directors.