Montréal, July 26, 2021 (Sportcom) – World champion Jessica Klimkait (-57 kg) has done what no female Canadian judoka has ever done before: step onto the Olympic podium. A victory by waza-ari over Slovenia’s Kaja Kajzer earned her one of the two bronze medals up for grabs at the legendary Nippon Budokan at the Tokyo Olympic Games.

“It’s the first time a Canadian woman has ever won an Olympic medal and I’m really proud of my accomplishment. I want to share it with my family and friends and all the coaches who have supported me,” said Klimkait in a post-competition press conference. 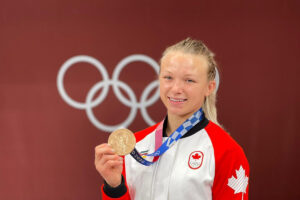 Klimkait’s day started very well as she quickly defeated Bulgaria’s Ivelina Ilieva by ippon on a hold. Her next match against Poland’s Julia Kowalczyk in the quarter-final ended in much the same way.

However, the Ontario native’s gold medal dreams dissipated in the semi-final, when she lost to France’s Sarah Leonie Cysique after receiving three penalties. Cysique faltered in the final round, losing to new Olympic champion Nora Gjakova of Kosovo and claiming the silver medal.

“It was hard for me after the semi-final because I really had my heart set on gold. But I wanted to be able to pull it together for the bronze medal final, that’s all I had in mind,” explained the Olympic medallist.

As the reigning world champion, Klimkait had arrived in Tokyo with a target on her back. However, as the ‘one to beat,’ she had not felt any additional pressure. Her plan was to focus on her fights and savour her first Olympic experience.

“I didn’t feel like anything was different because I’m the world champion. Whatever my rank, it doesn’t change my approach to a fight. I’m really grateful to be in Tokyo and to be able to practice my favourite sport.” 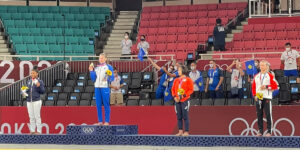 Following a win in the repechage that advanced him to the bronze medal final, Arthur Margelidon (-73 kg) believed his chances were good. And if his performances following his first bout were any indication, he had good reason to believe. He had faced some tough opponents. However, the final one, Tsogtbaatar Tsend-Ochir of Mongolia, dashed his hopes of standing on the podium, beating him with an arm lock that led to his surrender only 32 seconds into the fight.

“I started out strong in that bout. I was feeling good and I thought I could beat him. I made an error and he swept me as I was turning. I fell onto my stomach and as I tried to get up, he got me in an arm lock. My error was his advantage,” admitted Margelidon. 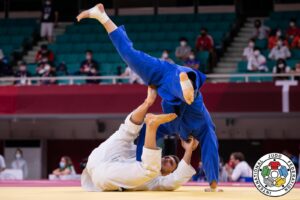 Earlier in the day, Margelidon had defeated Saudi Arabia’s Sulaiman Hamad by waza-ari with less than a minute to go in the match. The Montrealer then went on to beat Zhansay Smagulov of Kazakhstan in the same manner in the round of sixteen.

“My first two bouts went really well. Plus, I was able to come back from behind against Smagulov. I felt really confident after that.”

In the quarter-final, however, his opponent Lasha Shavdatuashvili of Georgia was very aggressive and Margelidon lost by ippon in overtime.

The 27-year-old quickly put the setback behind him as he defeated Israel’s Tohar Butbul in the repechage to earn a spot in the bronze medal final.

“My loss in the quarter-final was hard to take. But I was able to recover and I’m glad that my hopes for gold didn’t affect me too much in the repechage. I really wanted to be able to fight for bronze.”

Margelidon made it clear that this was not how his judo career would end. He plans to make his way to Paris in 2024 and snag an Olympic medal in the land of his birth.

In the men’s under-73 kg gold medal final, Shavdatuashvili, who had defeated Margelidon in the quarter-final, bowed out to Japan’s Shohei Ono, who was crowned Olympic champion for the second time, having also won in Rio in 2016.

On Tuesday, Catherine Beauchemin-Pinard (-63 kg) and Antoine Valois-Fortier (-81 kg) will step onto the tatamis of the Nippon Budokan.