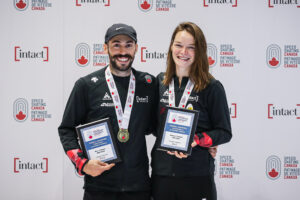 Boutin and Dubois were also the overall champions at the last Canadian Short Track Championships in September 2019. Last season’s Canadian Championships were unfortunately cancelled due to the COVID-19 pandemic.

The three highest ranked skaters per gender – Boutin, Sarault and Brunelle on the women’s side; Dubois, Dion and Pierre-Gilles on the men’s side – earned an automatic berth on the Special Olympic Qualification Competitions (SOQC) Racing Pool, the group of skaters that will represent Canada on the World Cup circuit this fall.

The remaining three places per gender in the SOQC Racing Pool will be awarded in accordance to the criteria established in the 2022 Short Track Olympic Selection Policies and Procedures, which can be simplified as the following:

To be eligible to be nominated to represent Canada at the 2022 Winter Olympic Games in Beijing., athletes must first qualify for the SOQC Racing Pool at this event. They’ll put themselves in contention for the Beijing 2022 team based on their performances at the four fall World Cup competitions, which are scheduled for Beijing (CHN), Nagoya (JPN), Debrecen (HUN) and Dordrecht (NED).

The results from these Canadian Short Track Championships will also be used to select the members of the National Team and NextGen Team for the 2021-2022 season. Both of those teams will be revealed in the coming weeks.

All five days of racing from this season’s first national level short track competition can be re-watched on Speed Skating Canada’s YouTube channel and Facebook page.

I’m really proud of the week I have had. I think the break I took was essential for me, not only for my physical health but for my mental health as well. Three months ago, I had a lot of trouble being happy on the ice, but I really worked on things and today I can say that I’m really proud of what I accomplished. It was a big personal journey for me. I’m surrounded by very good people at the moment, and I am happy with where I’m at.” – Kim Boutin

“It went really well this week and I’m very happy. I found it difficult [for the 1500m] because I didn’t really have anything at stake. The only motivator for me was to rank in the top-2 so that I could race this distance at the World Cups. I told myself that I was to find a way to challenge myself tactically to learn from this race. I followed my race plan perfectly and it worked really well.” – Steven Dubois

Rankings are calculated based on the best 2 of 3 race results in each skater’s best 2 distances.