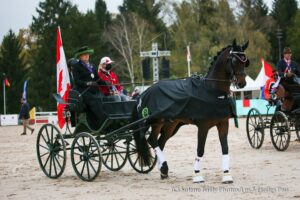 The Championship was a combined driving event, which features three phases of competition: dressage, a cross-country marathon and obstacle cone driving. Similar to eventing, scores and times from each phase are converted to penalty points and the competitor with the lowest combined score after all three phases is the winner.

Houtappels-Bruder secured her podium spot driving the 12-year-old Oldenburg gelding Flip (Fidertanz x Carprilli), whom she co-owns with husband, Frank Houtappels. Together, the combination had recorded two previous FEI Driving World Championship for Singles top-10 finishes: seventh in 2015 in Piber Köflach, AUT, and ninth in 2018 in Kronenberg, NED. Houtappels-Bruder also made an appearance at the 2014 Izsák World Championship driving Zidaan.

Armed with experience from Championships past and supported by a stellar team (groom and navigator, Meike Paridaans; coach, Corine Dorrepaal; veterinarian, Maud Smedts; and a crowd of Canadian cheerleaders watching via livestream), Houtappels-Bruder and Flip took to the dressage ring early on Oct. 21. A precise test featuring smooth transitions set the pair up for success with a score of 45.89 points for a provisional standing of third. 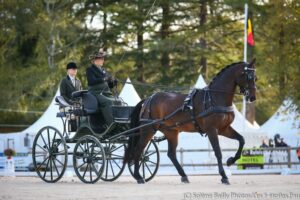 “Flip has come a long way in the last four years and that was certainly reflected in our dressage,” said Houtappels-Bruder. “Normally, the judging at a championship is much tougher and you expect a five-point dip in your score. But even with our early start time on the first day of competition, we managed to achieve a personal best score and win third place.”

In the following day’s marathon, a score of to 88.43 points for a fifth-place finish boosted Houtappels-Bruder and Flip into second place in the provisional standings with a combined dressage and marathon score of 134.32 points. 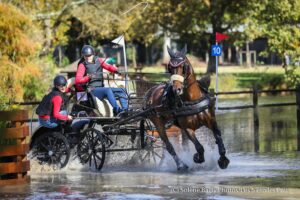 “The marathon course was tough – almost 20km long, including transitions with eight challenging obstacles – but Flip handled it with ease and clocked some of our best times,” commented Houtappels-Bruder. “The ground was really greasy, which made things tricky, but all in all he was a beast and we managed to drive a clear course with no steering corrections or knockdowns.”

The intensity of the battle for medals had increased dramatically by the conclusion of the marathon phase: France’s Marion Vignaud and First Quality sat a scant 0.24 points ahead of Houtappels-Bruder in first in the provisional standings, while the Netherland’s Saskia Siebers and Axel were just 0.80 points behind in third.

On Oct. 24, Houtappels-Burder held on to her hard-won position in the final cones phase, limiting her points with Flip to 4.68. The performance brought their final combined score to 139.00 points and secured silver for the Canadian combination out of the field of nearly 50 entries. The gold medal was awarded to Siebers and Axel (136.18 points), while bronze went to Poland’s Bartlomiej Kwiatek and Sonet (139.52 points). 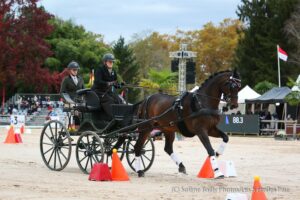 “Cones on Sunday was one of the toughest courses I’ve ever seen and it was reflected in the big shift in results on the last day,” said Houtappels-Bruder. “The optimum time was extremely difficult to make, especially with such a technical course. Flip was extremely fresh, so I had my hands full, but we managed to keep all of the balls standing and with only a few time penalties held onto the silver medal.”

Speaking to the fantastic level of competition she faced, Houtappels-Bruder commented, “Singles driving is evolving and it’s really exciting to be a part of the momentum. The challenge and the training involved is starting to produce some really great sport, which made it so complimentary [for the Championship] to be held in conjunction with the [Les 5 Étoiles de Pau CCI-L 5*].”

Equestrian Canada High Performance Director, James Hood, added, “A huge congratulations goes out to Kelly and her team based in the Netherlands, which helped her get to the silver medal at the FEI Driving World Championship for Singles. In the tough-fought battle across all three phases, she was able to build the scores and performances needed to earn the silver.”