TOKYO (August 25, 2021) – Keely Shaw kicked off the first day of competition at the Paralympic Games with a stellar performance, winning the bronze medal in the women’s C4 Individual Pursuit with a time of 3:48.342 to become Canada’s first Paralympic Games medallist. 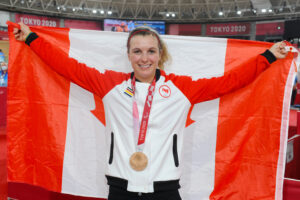 Shaw started the day by setting the third fastest qualifying time of 3:49.032, earning her place in the bronze medal final against Meg Lemon of Australia. In the end, she managed to shave off almost one second from her qualifying time to take the win against her competitor.

“I was a little bit disappointed with my performance after the qualifiers, I knew I had more in my legs than what I put on the track,” said Shaw. “I definitely left it all out there for the bronze medal race and that’s when it really mattered. I’m so excited to be able to show off all the work the entire team has done in the last five years and have that come out with a bronze medal for Canada.”

Tomorrow, Tristen Chernove will be competing in the men’s C1 Individual Pursuit with the goal of bringing home another medal. All competitions can be streamed on CBC Paralympics.