Montreal, October 24, 2020 – Canada’s judokas were more than ready to return to the international stage! Following Jessica Klimkait’s decisive victory in the under-57 kg class on Friday, Antoine Valois-Fortier and Arthur Margelidon both climbed onto the podium on Saturday at the Budapest Grand Slam in Hungary.

Valois-Fortier capped off his day with a silver medal in the under-81 kg category.

“I’m glad to see that all the sacrifices and adjustments we made, like travelling to Lethbridge, paid off. Over the past few months, we had to find creative ways to continue training at a high level and be ready to compete internationally. So this is very encouraging,” he stated.

Ranked fifth in the world, Valois-Fortier defeated Anri Egutidze of Portugal, Nicon Zaborosciuc of Moldova and Ivaylo Ivanov of Bulgaria in his preliminary rounds. In the semi-final, Saeid Mollaei of Mongolia put up a good fight against the Canadian. However, Valois-Fortier managed to come out ahead in overtime and move on to the finals, where he faced off against Vedat Albayrak of Turkey, who is currently fourth in the world rankings.

A few technical errors by Valois-Fortier cost him the title and left him in second place. “For me, the final round highlighted the limits of my strength and my preparation. I saw that there are aspects of my judo that still need to be worked on,” he explained. “I’m confident that with time and more competition experience, I’ll get to where I need to be to win.” 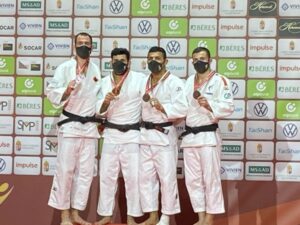 Valois-Fortier, who won his first three bouts by ippon, is satisfied with his performance in Budapest. This event was the first competition since the pandemic began. It provided him with a chance to ascertain where he stood after a long forced break.

“I wanted to get an idea of what I need to work on, so I’m just glad to have had the opportunity to compete. That was my goal and I achieved it.”

This was the Quebecker’s sixth Grand Slam medal.

Arthur Margelidon carved a path to the third step of the podium in the under-73 kg group.

“It feels good, especially since I was a bit off at the beginning of the day. I wasn’t on top of things, but by my third bout, I managed to pull it together and from there, my day kept improving,” explained Margelidon, who won silver medals at the Tokyo Grand Slam in 2017 and the Abu Dhabi Grand Slam in 2019.

Ranked fourth in the world in his weight class, Margelidon disposed of Russia’s Musa Mogushkov in overtime to snag the bronze medal in today’s meet. Earlier, he had beaten Russia’s Evgenii Prokopchuk and Austria’s Mathias Czizsek before bowing out to Switzerland’s Nils Stump in the semi-final. It was a bitter defeat for Margelidon, who had been the first to score with a waza-ari.

“I’m disappointed that I lost that match but happy that I was able to come back and win the bronze. I fought well in that bout, but I guess I backed off a little after getting ahead, so even though I had been dominating, I gave my opponent chances to score,” he stated. 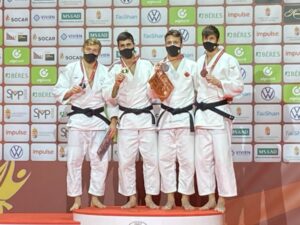 Like Valois-Fortier and his other Canadian teammates, Margelidon wanted to know where he stood among judo’s international elite. “Eight months was a really long time. I had never stopped competing for that long before. I wanted to compare myself to the other international athletes, some of whom hadn’t dealt with the same type of lockdown. I really wanted to perform well.”

In women’s competition, Catherine Beauchemin-Pinard fought in the under-63 kg class.

The Montrealer ousted Israel’s Inbal Shemesh and Poland’s Agata Ozdoba-Blach early in the day, finishing first in her group. She faced her only loss of the day in the semi-final against Venezuela’s Anriquelis Barrios, who went on to claim the silver medal.

Beauchemin-Pinard then moved on to the repechage and a fight for bronze. Just over a minute into the bout, she was overpowered by Hungary’s Szofi Ozbas.

“I didn’t have a lot of expectations today. I just wanted to get back into my old habits and go through all the stages of a tournament. I’m happy to have fought a few times. It was a good day overall,” claimed Beauchemin-Pinard, who holds the ninth spot in the world in her weight class.

The Budapest Grand Slam continues on Sunday. Shady El Nahas, who fights in the under-100 kg class, will be the only Canadian competing.