Montreal, April 3, 2021 – Canadian judoka Kyle Reyes ended the final day of the Antalya Grand Slam at the foot of the podium in the under-100 kg category on Saturday in Turkey. However, he will draw several lessons from his fifth-place finish in view of future competitions. 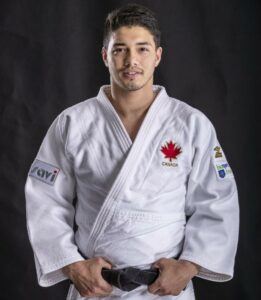 The Ontarian was caught off-guard in his last bout of the day against Estonia’s Grigori Minaskin, who clinched the match with an ippon after only nine seconds.

“To be honest, I’m not sure what happened, but I think I started off too slowly. I didn’t expect him to attack so early,” explained Reyes, for whom it was a first-ever career bout against Minaskin.

After defeating Denmark’s Mathias Madsen and Belarus’s Mikita Sviryd by ippon, Reyes lost to Russia’s Arman Adamian. However, a victory over Uzbekistan’s Mukhammadkarim Khurramov in the repechage earned him a spot in the bronze medal final.

“I’m disappointed in my last match, but it was a good day overall. I hadn’t participated in an IJF tournament for a long time, so I hadn’t felt this kind of nervousness, but I enjoyed my day. I’ll just need to get to know my opponents better and train harder,” said Reyes, who won a bronze medal at the most recent Pan-American Championships, which took place in November 2020.

In the same weight category, Shady El Nahas lost his only battle of the tournament. El Nahas, who clinched the under-100 kg gold medal at the Tbilisi Grand Slam last weekend, was defeated today by Serbia’s Aleksandar Kukolj, who won by waza-ari.

The two Canadians in under-90 kg competition on Saturday, Zachary Burt and Mohab El Nahas, were also eliminated after only one bout. Burt lost by waza-ari to Kazakhstan’s Yersultan Muzapparov and El Nahas bowed out to Israel’s Li Kochman, who went on to finish in third place.

In the over-100 kg category, Marc Deschênes ended his day with one win and one loss. He defeated Senegal’s Mbagnick Ndiaye before being ousted by the Czech Republic’s Lukas Krpalek.

The Canadian team thus concludes the Antalya Grand Slam with a total of four medals. Catherine Beauchemin-Pinard (under-63 kg) and Arthur Margelidon (under-73 kg) each won bronze medals on Friday, while Christa Deguchi defeated Jessica Klimkait in the under-57 kg final on Thursday, giving them a one-two finish overall for their weight division.