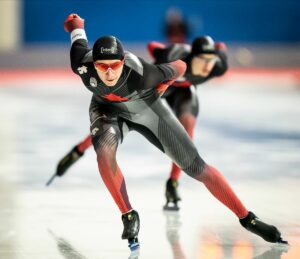 CALGARY, ALBERTA – Two new national champions were crowned on the fourth day of the 2021 Canadian Long Track Championships presented by Intact Insurance, as Ivanie Blondin and Connor Howe captured the 1500m titles up for grabs on Saturday.

While she was feeling off her game for the start of the week, Ottawa’s Blondin found her form for the 1500m with a time of 1:54.64. For the second time in these Canadian Championships, the women’s Team Pursuit squad completed the podium – Isabelle Weidemann (Ottawa, ON) and Valérie Maltais (Saguenay, QC) captured silver and bronze respectively after crossing the line in 1:55.57 and 1:55.80.

On the men’s side, 21-year-old Howe was the fastest to finish the 1500m distance. The native of Canmore, AB put forth a time of 1:43.50, more than a second faster than the rest of the field. Antoine Gélinas-Beaulieu (Sherbrooke, QC) reached the podium for the second time in as many days, this time upgrading to a silver medal after stopping the clock in 1:44.73. He narrowly bested Winnipeg’s Tyson Langelaar who skated a time of 1:44.90.

The final day of the Canadian Long Track Championships on Sunday will feature both the women’s and men’s mass start event. The races will be live streamed on Speed Skating Canada’s YouTube channel and Facebook page starting at 4:00PM MT.

“I’m relieved with my race today, for sure. The past few weeks have been a bit of a mental struggle for me, so I’m really happy and grateful that it went the way it did. It reassures me that even if I’m not feeling 100% mentally, I can still push through it and put out good performances. That’s something to keep in mind for the future and one of the many positives that came out of today.”

“Yesterday, I had a small crossover issue in the 1000m, so I wanted a little bit more out of today’s race and I feel that I was able to do that. My game plan was to execute my technique by being aggressive and relaxing to carry the speed as much as I could. The Olympics adds a lot of excitement to the year, so it’s a good year for it all to come together for me.”