Good was a champion of the Canadian Equestrian Team (CET) for many years, having owned more than 35 horses and supported numerous Canadian riders in realizing their dreams and reaching the podium. Many of his horses were named to the EC National Team Program Eventing High Performance Squads and received Canadian Eventing Awards of Excellence, illustrating Good’s eye for talent and desire to make Canadian eventers a powerhouse on the world stage.

Perhaps Good’s most well-known horse was Pavarotti, who took the eventing world by storm partnered with Olympian Jessica Phoenix. The Westphalian gelding was Phoenix’s partner at numerous major games, including: the 2011 Guadalajara Pan American Games, where Pavarotti carried Phoenix to the individual gold medal; the 2014 Normandy World Equestrian Games (WEG); and the 2015 Toronto Pan Am Games, where the duo claimed individual silver and led Canada to a team bronze medal. These achievements would not have been possible without Good and he was subsequently recognized as EC’s 2015 Owner of the Year for his unwavering, generous support.

“Don’s love for his horses was unrivaled,” said Phoenix. “He liked to win and was an incredible supporter of eventing in Canada but most of all, he was a true friend. No matter what plans I threw his way, he always had my back, travelling around the world to multiple WEGs and Pan Am Games to support Pavarotti and me. We accomplished so much together for Canada and the sport of eventing and I’ll cherish those memories for a lifetime. He will be deeply missed.”

EC Eventing Manager, Fleur Tipton, added, “The loss of Don is keenly felt by the national eventing community. He brought his good cheer to every event, and both the horses and riders he supported with were lucky to find such a passionate partner who deeply cared about their success and, even more importantly, their overall happiness.”

Good is survived by a large, loving family and many friends. In lieu of flowers and as expressions of sympathy, donations would be accepted to Youthdale Riding Program and KidsAbility. 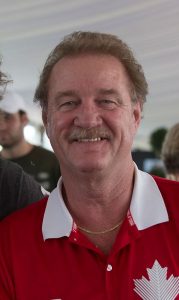 PHOTO – Equestrian Canada offers sincere condolences to the family and friends of the late Donald J. Good of New Hamburg, ON, who passed away on Aug. 4, 2020, at the age of 68.
PHOTO CREDIT – Cealy Tetley