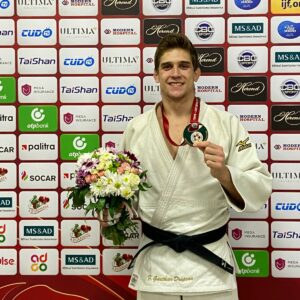 Montréal, November 6, 2021 – By his own admission, François Gauthier-Drapeau is off to a great start this season. After a strong performance that earned him a bronze medal at the recent Málaga Open in Spain, the Québécois achieved a similar feat on Saturday, climbing onto his first-ever Grand Slam podium in Baku, Azerbaijan.

The Canadian was indomitable in his bronze medal final against Dorin Gotonoaga of Moldova. Gauthier-Drapeau, who was determined to reach the podium, began attacking early in the bout. His efforts were rewarded in the third minute of regulation time, when he scored a waza-ari to take the lead. He then employed a combination of cunning and patience to run down the clock and claim the bronze medal.

“Right now, I couldn’t be happier! I set some ambitious goals for myself at the beginning of the season, and I managed to not only reach them, but to exceed them. I’ve been wanting a Grand Slam medal for a long time, and now I’ve got one,” explained Gauthier-Drapeau, who had flashed a satisfied grin as he stepped off the tatamis.

“I don’t often celebrate my wins, but this time, I couldn’t help it. It really hit me that I had just won the fight and achieved another of my long-term goals. I realized that all the training and hard work of the past few years was really paying off.”

The win capped off a successful day for the Montréaler, who finished with a record of four wins and one loss. He won his first three matches of the day before meeting up with Turkey’s Vedat Albayrak in the semi-final, where his strength and determination pushed the bout into overtime.

Albayrak, the European champion in their weight division—ranked eighth in the world by the International Judo Federation (IJF)—ultimately scored an ippon to claim the victory. He followed suit by defeating Dominik Druzeta of Croatia in the same manner in the gold medal final, taking top honours in the competition.

“I knew [Albayrak] was very strong. It was very close and it was going well, but I started to run out of energy. It was a little like my other losses. He bested me when I tried to block him,” said Gauthier-Drapeau, who was able to take away some valuable lessons from the fight.

“It was a pretty risky move, but there’s a lot to learn from it. Until that exact moment in the bout, no one could have said which of us had a higher ranking. I know where my errors were, and I’ll work on those aspects to make sure I win my fights in the future.”

National team coach Sasha Mehmedovic agreed with Gauthier-Drapeau, who has been on a meteoric rise since the beginning of the current season.

“François fought very well today. This was his first Grand Slam medal and a well-deserved one. He displayed a lot of skill today and showed that he can compete with world-class athletes in his category. I’m very pleased with his performance,” said Mehmedovic at the end of the day.

The tournament did not end on quite as high a note for Joel Demaere, who did not register any wins on Friday in the under-60 kg category.

The Albertan was shown the door in his first bout of the day by Mongolia’s Sumiyabazar Enkhtaivan, who won by waza-ari. Enkhtaivan then went on to finish fifth in the tournament.

The Baku Grand Slam will conclude on Sunday, with five remaining weight classes in competition. Keagan Young will compete in the under-90 kg category, while Ian Ryder and Shady El Nahas will fight in the under-100 kg group.