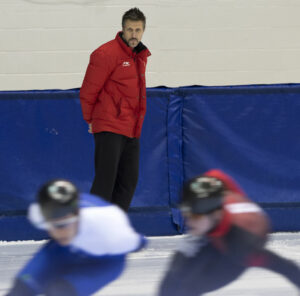 MONTREAL, QUEBEC – Five-time Olympic medalist Marc Gagnon is set to join Canada’s national short track program as an Assistant Coach, where he will help guide the country’s top skaters to podium performances at the 2022 Winter Olympic Games in Beijing.

With over a decade of coaching experience under his belt, the native of Chicoutimi, Que., will play an integral role in the new coaching structure that will take Speed Skating Canada through to the 2022 Games.

In addition to Gagnon’s hiring, Sébastien Cros has been formally named National Team Coach, with leadership of both the men’s and women’s national teams. Cros has been involved with the National and NextGen programs in various capacities since 2007, which includes leading the women’s team to a pair of silver medals at Vancouver 2010 and helping the men’s team win seven World Cup medals last season.

Gagnon, 45, has been a part of the coaching staff at the Canadian Regional Training Centre (CRCE) in Montreal since 2010, where he was responsible for preparing the sport’s rising stars. He was promoted to head coach of the CRCE in 2014 and recently began mentoring two new assistant coaches – Marianne St-Gelais and Jonathan Perez-Audy. He will continue to provide support to the CRCE coaching staff through the end of the 2021-22 season, helping to ensure the ongoing success of this critical development program.

As a skater, Gagnon enjoyed over a decade of success on the national team and finished his career as one of Canada’s most decorated short track speed skaters.

“I’m really excited to be reuniting with many of my former athletes and to help continue their development all the way to the Olympic Games. I’m looking forward to collaborating with one of the world’s greatest short track coaches, Sébastien Cros. Sébastien and I share the same ideas and to support him in his vision of developing the key skills needed for international success motivates me enormously. As I have been saying since my early days as a coach, I am dedicated to giving young people the tools necessary so that they too have the chance to achieve their dreams.” – Marc Gagnon, Assistant Coach, Short Track Program

“I am excited for this new challenge of leading both the men’s and women’s program into Beijing and am happy to team up with Marc to help our athletes achieve success. In addition to his experiences as a five-time Olympic medalist, he also brings a wealth of knowledge gained over several years as Head Coach of the Canadian Regional Training Centre. Marc has demonstrated an ability to work hard and demands a lot from those around him, which will allow us to improve the support given to our best athletes.” – Sébastien Cros, National Team Coach, Short Track Program

“Marc’s breadth of knowledge, experience and intrinsic feel for the sport is something that will enhance our program and benefit our athletes. His passion for teaching and helping those around him excel – as evident in his commitment to remaining involved as a mentor for our Regional Training Centre coaches – are attributes our organization is looking for. We are excited that he will soon benefit from the Coaching Enhancement Program, offered through our valued partners at Own the Podium, which has helped us develop some of the top coaches in the world and will further build on Marc’s skills.” – Shawn Holman, Chief Sport Officer, Speed Skating Canada