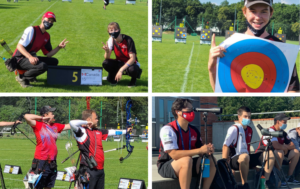 Brady Klassen (Winnipeg, MB) faced off against Martin Antoine Marino Pinili from Hong Kong in the first round and won (139-130), then went up against Daniil Kosenkov from Russia, unfortunately losing (137-144).

In the compound cadet men’s competition, Isaac Bedford (Williams Lake, BC) competed against Luis Balaci of Romania and won the match with a score 141-134; he will now face Andrey Tyutyun from Kazakhstan in the next round. Dustin Watson (Peterborough, ON) shot in his first elimination round against Miguel Rubio from Spain (139-133) and will now face 7th-placed Isaac Sullivan from the United States.

Chyler Sanders (Winnipeg, MB) was up against Julita Hankus of Poland in the first round of the compound cadet women’s competition, winning the match with a score of 131-124. She now goes on to face Priya Gurjar from India, who ranked 1st in the qualification rounds.

Canada’s compound cadet mixed team, consisting of Bedford and Sanders, won their first match against Poland and will now face Turkey in the next round. The recurve junior men’s team move forward in the bracket to face Japan, after beating the Estonian team with a score of 5-3.

“We are very excited to see all compound athletes successfully move on in their first match with some pretty close nail biters, including the mixed team event,” remark the teams’ leaders. “To prepare for today’s matches, the athletes stayed focused and successfully executed on their shots. On the recurve side, although Chouinard was unsuccessful in his second individual match today against Russia, the full recurve junior men’s team took out Estonia in a close 5-3 match at the end of the day under gusty wind conditions. The compound team is preparing for tomorrow’s heavy schedule of individual and mixed team matches and recurve men are preparing for Friday’s matches. Everyone is focused on the task of representing Team Canada at this event.”