Tokyo, JPN, Aug. 2, 2021 – Colleen Loach of Dunham, QC, and Qorry Blue d’Argouges had a performance to be proud of in the final jumping phase of eventing competition, held Aug. 2, 2021, at the Tokyo 2020 Olympic Games in Japan.

Santiago Varela of Spain designed the evening’s winding courses, which featured fences beautifully decorated to show off elements of Japan and its culture.

Sitting on 42.80 penalties after a solid dressage test and textbook cross-country phase, Qorry Blue d’Argouges showed he had plenty of gas left in the tank for the Jumping Individual Qualifier. Loach, 38, and the 17-year-old Selle Français gelding owned by Peter Barry and sired by Mr. Blue gunned through the 15 jumping efforts in 75.33 seconds, almost four seconds under the time allowed.

Unfortunately, Loach met misfortune at 9b, part of the combination ironically styled after the good luck charm, Daruma. She skillfully managed 9a – a square oxer that spelled disaster for a significant number of combinations – but brushed the rail out of the cups at the following vertical. A second unlucky rub on the last fence, a square oxer depicting the Japanese calligraphy subject Ensō in its design, brought her total jumping penalties to 8.00.

“I had hoped for a little bit better results, to be completely honest, but I’m thrilled with my horse and it’s just where I’m at and where he’s at right now,” said Loach, whose finish represented an admirable jump from her last Olympic appearance in Rio 2016, where she and Qorry Blue d’Argouges finished 42nd. “I can’t complain about my horse, he jumped really well. It was just unfortunate that I had to go a little bit into that combination at 9 and then I wasn’t quick enough with my body to recover after for him. He felt good, he was a good boy.”

Speaking of her teammate, Jessica Phoenix, who withdrew her horse, Pavarotti from eventing competition at the first horse inspection, Loach commented, “She handled it as well or better than anybody else I know would have. She was so supportive and right there for me and always smiling. Whatever I needed, she was out there getting and was just a really good cheerleader and teammate. I respect her a lot for the way she handled the situation.”

“I am extremely proud of Colleen and Qorry on their Olympic performance,” said Tipton. “I would also like to recognize and thank Peter and the entire team who worked tirelessly to support their effort – eventing is truly a team sport.”

Up next for the Canadian Equestrian Team in Tokyo will be the jumping competition, which begins with the Jumping Individual Qualifier on August 3 at 6:00 a.m. ET

For more information on equestrian events at the Tokyo 2020 Olympic Games, including the full schedule of equestrian competition and results, please click here. Further information on the Canadian Equestrian Team can be found at on the Equestrian Canada #RidetoTokyo webpage. 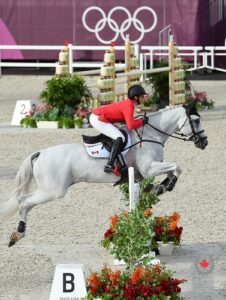 PHOTO – Colleen Loach of Dunham, QC, and Qorry Blue d’Argouges made the most of their second Olympic appearance during the final jumping phase of eventing competition on Aug. 2, 2021, at the Tokyo 2020 Olympic Games in Japan.

Photographs may be published with articles relating to the Tokyo 2020 Olympic Games and must include photo credit. For high resolution photographs, please e-mail csoble@equestrian.ca.