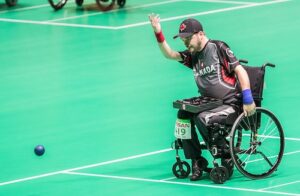 Ottawa, ON (August 29, 2021) – Iulian Ciobanu remained undefeated in the individual preliminary bracket of the BC4 category. On Sunday, the Montrealer came back from behind to defeat Ximei Lin of China 6-4.

Ciobanu took an early 3-0 lead, but his opponent had not given up yet. She scored 2 points in the second and third end, which allowed her to take a 4-3 lead with one more end to play.

On his second to last ball, the 38-year-old made a great shot that displaced the jack away from his opponent’s balls. Ciobanu shouted out in excitement for the 2 points scored, and added an additional point with his last ball. His coach César Nicolai, said he was very happy with the way his athlete performed against Lin.

“Iulian followed the game plan perfectly. He was able to execute everything that has been done in practice in the last two years.”

This is his second victory in the Japanese capital after the previous day’s tiebreaker win against Portugal’s Carla Oliveira 4-3.

On Monday, Ciobanu will face 2018 world champion Yuansen Zheng. Also undefeated so far in Tokyo, the Chinese athlete was a silver medalist at the London Games in 2012.

“I feel ready to face Zheng, who is a former world champion. I have a strategy and I hope to win to secure my place in the quarterfinals. Even if I lose, I will finish second in my group, but it would be complicated to know if I will be able to advance. My goal is obviously to win the game,” Ciobanu said of his next match.

Not the outcome Levine and Allard were hoping for.

Alison Levine, also in the BC4 category, was surprised by her opponent Wai Yan Vivian Lau of Hong Kong who mounted a comeback in the last two ends.

Levine was ahead 2-0 halfway through the match and then her opponent started the comeback. Lau first tied the match 2-2 in the third end before adding a final point in the last end to escape with the win.

“It’s obviously not the result I wanted today (Sunday). I wasn’t at my best. I’m disappointed that I didn’t play to my full potential,” said Levine after her second match of the tournament.

The Montreal athlete will have the chance to get back to winning ways on Monday, August 30 when she faces Croatia’s Davor Komar, who, like Levine, has a record of one win and one loss.

In BC2, Danik Allard suffered his second consecutive loss when he faced Hidetaka Sugimura of Japan.

The match did not start well for the Montrealer who found himself behind 6-0 after the first two ends. Allard came back in the third end to score three points and cut the deficit in half.

Despite a last-ditch effort in the final end, it was too little too late for the 20-year-old who lost 6-4.

“We knew that we would be met with great challenges, but still bringing a very valuable experience for Danik. He has proved that he belongs at the highest level and that he has a bright future ahead of him. All of his hard work has been paying off.”

On Monday, Allard will attempt to win a first game in Tokyo when he faces Russian Paralympic Committee athlete Diana Tsyplina.

Boccia Canada is the boccia delivery arm of the Canadian Cerebral Palsy Sports Association (CCPSA), the National Sport Organization for the Paralympic sport of boccia. Boccia Canada is focused on providing athletes and individuals of all ages and skill with the chance to play a unique Paralympic sport. CCPSA collaborates with partners to increase the participation of Canadians with cerebral palsy and related disabilities in sport and physical activity, while leading, developing and growing boccia from grassroots, to producing World and Paralympic Champions.