Montréal, September 9, 2021 – The organization of sports leagues and sports events across the country would not be possible without the invaluable contributions of volunteers. Judo is no exception, and in Saskatchewan, Carolyn Bagnell has been the ultimate example of community spirit and volunteerism for over a decade.

It all started thirteen years ago, when it was suggested to her children that they try combat sports. After watching several videos, her son Daniel was intrigued by judo. “We knew right away that it was perfect for him,” said Bagnell. 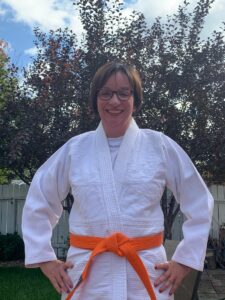 Her son’s passion for judo naturally led Bagnell to become involved, initially at the regional level, then later at the provincial level.

“They asked me to help at the club. It was important for me to make myself useful to ensure the viability of the sport my kids were so passionate about. As a mother, I saw the benefits of judo and I wanted to give back. [My children] acquired the notions of respect and self-confidence. They began to take their training very seriously and made great friends. They were very motivated, so I wanted to do my part,” explained Bagnell, who also appreciates the social aspect between the parents.

Once judo entered the family home, it quickly became an important part of the family, to the point that Bagnell herself took it up. She now has her orange belt.

“When your kids are so heavily involved in something that is important to them, you can’t just hang back. My involvement came naturally,” she said humbly, in reference to her numerous commitments, which include the roles of president of the finance and marketing committees, member of the board of directors, and member of various other Judo Saskatchewan committees.

Over the years, Bagnell has become a pillar of judo in her province. In addition to sitting on numerous committees, she is also involved in various events, as well as serving as the president of the Saskatoon YMCA’s judo club and a member of its board of directors.

And as for her busy schedule? She doesn’t mind it at all! In fact, she encourages others to try volunteering. Everyone wins! “In the end, the help you provide is very useful and you feel good about it. Knowing that you contributed to the success of your sport is very satisfying. It may be a little selfish, but I feel good about helping. People tend not to volunteer because they think they have nothing to offer. And yet, there’s a place for everyone in every organization, and you get back so much more than you give by becoming involved.”

Mike Tamura, president of Judo Canada, could not agree more. “Without volunteers we could not exist. Whether it is at the club, the province, or the country, they are involved at all aspects levels. Volunteering is about giving back, doing something for others, without expectations. They are always essential, but in these difficult times they are even more precious for our sport. Carolyn Bagnell embodies this philosophy in addition to having embraced the practice of judo. We are proud to have her in our huge family. Thank you Mrs Bagnell.”

Are you looking for a club near you? Visit this page: judocanada.org/club-finder-tool/