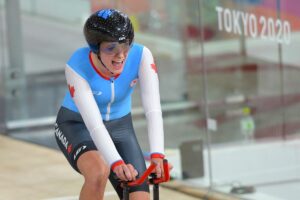 TOP HIGHLIGHTS OF THE DAY

“Just standing on the podium at the Games is something really special regardless of the position and the colour of the medal,” Rivard said post-race. “This said, I didn’t have a bronze medal in my collection and I didn’t really want one. I didn’t have a good race but the girls deserve the gold and silver medals. Of course I wanted to win my title back, which is disappointing, but I’m going to deal with that later.”

In other swimming results, Shelby Newkirk (Saskatoon, SK) and Nicholas Bennett (Parksville, BC) both set new Canadian records in their respective events (women’s 50m freestyle S6 and men’s 100m butterfly S14) but just missed out on qualifying for the finals. Alec Elliot (Kitchener, ON) and Angela Marina (Cambridge, ON) also did not make it out of the heats.
In wheelchair basketball, the Canadian women’s team opened its tournament on a strong note with a 73-54 triumph over Great Britain. After trailing by a close margin through most of the first half, Canada tied it up at 35-35 partway through the third quarter and never looked back, opening up an insurmountable lead in the final few minutes. Kady Dandeneau (Pender Island, BC) was Canada’s high scorer with 32 points and a triple-double in her first Paralympic game, while Rosalie Lalonde (Saint-Clet, QC) and Arinn Young (Legal, AB) chipped in with 20 and 12 points apiece.

“We got the win, so regardless of what my stat line was, I think I’d be pretty happy because that was a pretty big game against GB,” said Dandeneau. “They’re a pretty solid team, so that was cool. It definitely feels good to be a big contributor in games like that. Honestly, it was just a really good team win. I have my teammates to thank for a lot of that. They’re getting me open. It’s definitely very much a team thing.”
Canada’s wheelchair rugby team was defeated 50-47 by Great Britain in its debut game of Tokyo 2020. While it was a tight match throughout, the Brits took a slight lead in the first quarter and never relinquished it from there. Canada will now look ahead to its next match-up against USA on Thursday.

“[This was our] first international game in 18 months. I am proud of how the guys performed,” said head coach Patrick Côte (Montreal, QC). “Tough start, we didn’t get a few bounces in the game which gave momentum to [Great Britain]. We fought our way back; we did some turnovers and couldn’t convert on the last possession at the end of the third and in the fourth, that was pretty much the game. Our transition on offence, our key defence in the second half, those are all things we want to carry over to the American game.”

MEDIA RESOURCES: Resources to cover the Tokyo 2020 Canadian Paralympic Team, including athlete bios, flash quotes, and access to photos and video highlights, are available at Paralympic.ca/tokyo-2020-media.

About the Canadian Paralympic Team: Canada is represented by 128 athletes competing in 18 sports at the Tokyo 2020 Paralympic Games, taking place August 24 to September 5.

[LINK] LIST OF MEDIA CONTACTS BY SPORT
For interview requests with the athletes during the Tokyo 2020 Paralympic Games, please contact the specific sport media attaché.