Tokyo, JPN, Aug. 29, 2021 – After the conclusion of Team Test competition on Aug. 29, 2021, the Canadian Para-Dressage Team earned a respectable 10th-place finish at the Tokyo 2020 Paralympic Games in Japan.

Three Canadian combinations performed at Baji Koen Equestrian Park during the Grade I, II and III competitions on August 28: Lauren Barwick, 43, of Aldergrove, BC, and Sandrino, Lee Garrod’s nine-year-old Westphalian gelding sired by Spirit of Westfalia; Winona Hartvikson, 62, of Langley, BC, and Onyx, the 18-year-old Hanoverian gelding she co-owns with Jane Macdonald; and Roberta Sheffield, 40, of Lincolnshire, GBR, and Fairuza, her 12-year-old mare.

With a final score of 211.699, Canada sat in the gold medal position overnight until the conclusion of the following day’s Grade IV and V competitions.

Ultimately, a tight medal race finished with Great Britain on top of the podium on a total score of 229.905. The Netherlands followed close behind for the silver medal, scoring 229.249, and a score of 224.352 earned bronze for the United States.

“I am delighted with the performance of this group of athletes, grooms and support staff,” said Chef d’Équipe, Clive Milkins of Team Canada, who built on and progressed from a 13th-place finish at the Rio 2016 Paralympics. “Of course, I am disappointed with the final placing and yet, everyone performed well and tried their hardest and I couldn’t ask any more of them.”

Milkins continued, “We were only 4.3% behind sixth place, which is an average of roughly 1.3% per horse/rider combination. As we know, dressage is subjective and so on another day, we could be so much higher. We have learned so much from this trip and will come back stronger next time. Many congratulations to the medal winning teams and many thanks to all at Equestrian Canada for making this happen.”

Para-dressage will conclude at Tokyo 2020 with the Freestyle Test for all Grades on August 30; unfortunately, Canadian combinations narrowly missed the top-eight cut off in the Individual Test to move forward in Grades I and III.

For more information on equestrian events at the Tokyo 2020 Paralympic Games, including the full schedule of equestrian competition and results, please click here. Further information on the Canadian Equestrian Team can be found at on the Equestrian Canada #RidetoTokyo webpage. 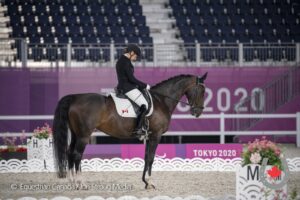 Photographs may be published with articles relating to the Tokyo 2020 Paralympic Games and must include photo credit. For high resolution photographs, please e-mail csoble@equestrian.ca.