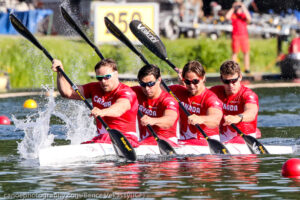 Two-time Olympian and bronze medallist, Mark de Jonge reflects on the very long journey to Tokyo. “It feels very satisfying today having put so much effort and energy into this process. It has been such a long haul for everyone. There has been so much doubt around so many things over the last year and it all gets bottled up. That doubt was all released today.”

The Men’s K4 500m berth was secured by this winning crew back in 2019 at the ICF Sprint World Championships. Both the men’s and women’s Canadian K4 teams are now finalized for the Tokyo Olympic Games.

Brian Malfesi (Ridge Canoe Club) and Vincent Jourdenais (Club de Canoë-Kayak de Trois-Rivières) also lock up their qualification for Tokyo in the Men’s K2 1000m by achieveing the highest rank at Olympic Team Trials and completing the six-man kayak team for the Games.

“This has been a long process for these crews,” said Graham Barton, Chief Technical Officer at CKC. “Due to exceptional circumstances, including an injury just before Olympic Trials and a recent decision to remain at home during the World Cup season, the Men’s K4 finals to select athletes were rescheduled to this week in Montreal.  We appreciate how difficult this has been on the athletes and the coaches but their professionalism throughout the Covid restrictions has Canada going to Tokyo with an experienced K4 crew that achieved some respectable times in cold water conditions this week.  I am confident they can make the final in Tokyo.”

Tokyo Olympic and Paralympic selection continues for some CKC teams with additional internal selection procedures or Global Olympic qualification opportunities throughout the rest of May.

To learn more about the status of Tokyo qualifications for Canadian sprint paddlers, click here.

*Prior to being named to Team Canada, all nominations are subject to approval by the COC’s Team Selection Committee following its receipt of nominations by all National Sport Organization.