Slezak finished the weekend in sixth place overall in the CCI4*-S division riding Fernhill Wishes, a 12-year-old Irish Sport Horse gelding (Chacoa x Gildawn Diamond). Sitting on a score of 32.3, which tied him for 15th place after the opening phase of dressage, Slezak then jumped clear with 1.6 time penalties in the show jumping phase. Finishing Friday’s competition with a provisional score of 33.9, Slezak was in eighth place heading into Saturday’s cross-country phase.

Riding over a track designed by Mark Phillips of Great Britain, Slezak again avoided any jumping penalties but picked up 10 time penalties for finishing the course over the optimum time allowed of six minutes and 17 seconds. With a final score of 43.9, Slezak placed sixth overall. The event was won by multi-Olympic medalist Phillip Dutton of the United States with a final score of 28.6 riding Fernhill Singapore.

“You know it’s always going to be a challenging course when Mark’s designing with lots of angles and technical-type questions and that’s exactly what it was,” said Slezak of Stable View’s cross-country track. “There were challenging questions but with good gallops that flowed and helped get the horse’s confidence up. Stable View is a beautiful venue with rolling hills, the footing is good, and it’s a great last preparatory run before any big fall event.” 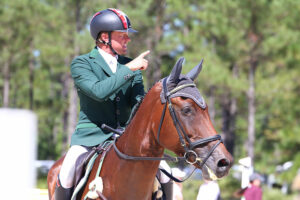 Slezak was using his outing at Stable View to prepare for the upcoming Maryland 5 Star at Fair Hill, scheduled for October 14 to 17 in Elkton, MD. A new addition to the eventing calendar, the inaugural Maryland 5 Star becomes one of only two five-star events held in North America, the other being April’s iconic Land Rover Kentucky Three Day Event in Lexington, KY.

Slezak has been partnered with Fernhill Wishes since the horse was a four-year-old coming five. The pair began their journey in international level competition back in 2015 and have progressed from the one-star level to representing Canada at the 2019 Pan American Games in Lima, Peru, where they won a team bronze medal and finished 12th individually. Slezak is currently a member of the Canadian Equestrian National Team Program with Fernhill Wishes.

“He’s a pretty laid-back dude,” said Slezak, 39, of the horse he owns in partnership with Kirk Hoppner. “He always settles into these events and the more he does, the better he gets.

“He does get excited on cross-country day, and going from Florida to anywhere colder amps him up enough that it works to my advantage,” continued Slezak, who recently relocated his business, Karl Slezak Eventing, to Spruce Stables South in Ocala, FL. “We tweaked a few things in his training this year and he feels better than ever. I’m pretty excited about him going to Maryland 5 Star; I can’t wait to get there and check it out.” 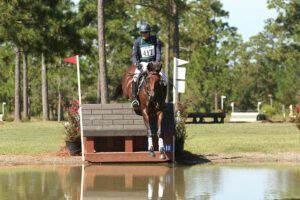 Kyle Carter of Sparr, FL, who is part of the National Team Program’s Development Squad with Reddy Or Not, also contested the CCI4*-S division at Stable View. Sitting in second place with a score of 28.3 after dressage, one rail down in show jumping dropped the pair to fifth. A refusal on course and time penalties during the cross-country phase saw Carter and the 12-year-old American Trakehner mare (Oskar II x Windfall) owned by The Christy Edwards Farm fall to 19th place in the final standings with a score of 71.1.

Two Canadians also contested the CCI2*-S division. Dana Cooke, 34, placed seventh riding Quatro, a seven-year-old German Sport Horse gelding (Quaterstern x Coriograf B) owned by Kingfisher Park. Cooke, who is based in Moorseville, NC, was sitting sixth after dressage with a score of 29.9. One rail down in show jumping and a clear cross-country performance placed them seventh overall with 33.9.

Lesley Grant-Law, based in Ocala, FL, placed 13th overall with Fernhill Finalist. Clear jumping rounds with only time penalties incurred in both the show jumping and cross-country phases saw the pair move up the leaderboard from 24th position in the opening dressage phase.