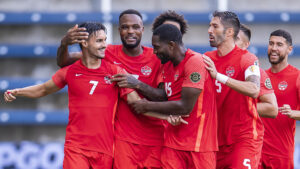 Canada Soccer is coming home. For the first time since the global pandemic, Canada Soccer’s Men’s National Team will play at home on their journey to the FIFA World Cup Qatar 2022™. On the heels of an inspiring Concacaf Gold Cup run to the confederation semifinals, Canada will play both Honduras and El Salvador at BMO Field in Toronto this September as part of the Concacaf Final Round of FIFA World Cup Qatar 2022 Qualifiers.

All matches will be held in Canada subject to Government of Canada authorization with fans permitted pending relevant public health approvals from the City of Toronto and Province of Ontario. Ticket sales information will be shared within the coming days.

With 14 matches to be played in the Concacaf Final Round from September 2021 to March 2022, Canada will in fact play three matches in the September window: opening at home on Thursday 2 September against Honduras, away in Nashville against USA on Sunday 5 September, and back home in Toronto on Wednesday 8 September.

“We really want to sing that anthem at home in Canada with our fans, there’s no better sound in sport,” said John Herdman, Canada Soccer’s Men’s National Team Head Coach. “We’ve shown in recent times that we are ready to have a real push for the FIFA World Cup Qatar 2022™. With the fans behind us at home, it will bring us to another level.”

Canada has built plenty of momentum in a landmark year for the Men’s National Team Program that will feature a record 19 international matches including FIFA World Cup Qualifiers and the Concacaf Gold Cup. Canada have already played 11 of those 19 matches, posting a record of 9-0-2 with six clean sheets and a record 42 goals scored. Canada also set a record with eight consecutive wins and reached the Concacaf Gold Cup Semifinals for the first time since 2007.

“The last qualification process in June was really important for this group of men to build a resilience and camaraderie in games where you knew if you slipped up, our FIFA World Cup dream would have been up in smoke,” said Herdman. “That sort of pressure, the expectation, scrutiny and consequences has just hardened the group. With those moments, confidence has grown and in the Concacaf Gold Cup it continued to build.”

From the first seven months of this year, Canada has called up 52 players from which 31 have featured in Canada’s 11 international “A” matches. Nine of those players have made their Canada debuts in 2021, including Tajon Buchanan who won the Concacaf Gold Cup Young Player Award and was named to the tournament’s Best XI. Fifteen different players have scored for Canada in 2021, including Cyle Larin who has set a Men’s National Team record with 10 goals in nine matches.

In all, Canada Soccer’s Men’s National Team will play seven home matches from September 2021 to March 2022 as part of the Concacaf Final Round in FIFA World Cup Qualifiers Qatar 2022.

CANADA SOCCER’S MEN’S NATIONAL TEAM PROGRAM:
Canada Soccer’s Men’s National Team are two-time Concacaf champions, previously winning the 1985 Concacaf Championship and 2000 Concacaf Gold Cup. This year marks Canada’s 15th participation at the Concacaf Gold Cup since 1991. Along with their first-place finish in 2000, Canada reached the Semifinals in 2002, 2007, and 2021. Across the past five years from 2017 to 2021, Canada are one of only four nations that have finished top-six across all three Concacaf major tournaments: fifth place in Concacaf Nations League A, sixth place at both the 2017 and 2019 Concacaf Gold Cups, and top-four at the 2021 Concacaf Gold Cup.