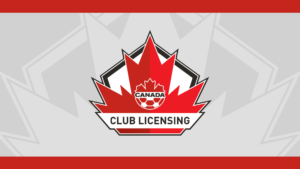 “Congratulations to the new and upgraded clubs that have committed to meeting the standards as set out in Canada Soccer’s Club Licensing Program in Quebec, New Brunswick, and Saskatchewan,” said Peter Montopoli, Canada Soccer’s General Secretary. “The commitment of the more than 170 Canada Soccer Club License Program clubs in Canada are a testament to the quality of player development taking place from coast-to-coast-to-coast in support of our Safe Sport Roster, and the ongoing collaboration between Canada Soccer, our Member Associations and their member clubs.”

Canada Soccer’s Club Licensing Program was launched in 2017 with the Canada Soccer Professional Club Licence. Canada Soccer announced the expansion of the program to youth soccer in 2018 in collaboration with its Provincial and Territorial Member Associations and incorporating international best practices.

To date, 170 Member Organizations from across nine Member Associations including 50 National Youth Club Licences holders in Quebec, Ontario, Alberta, and British Columbia have been granted licences. More information on the program can be found at: https://www.canadasoccer.com/play-landing/club-licensing-program/